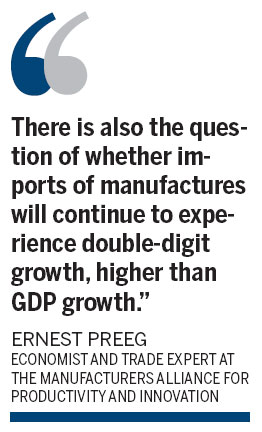 New figures will tell if exports are moving up the ladder as Japan did.

All eyes will be on China's third-quarter trade figures this fall for signs that a tumble in Chinese exports of manufactured goods stems from the government's economic restructuring plan.

Ernest Preeg, an economist and trade expert at a Virginia-based industry-funded research group, has compiled data showing that second-quarter growth of exported goods in China plunged to 3 percent from 19 percent in the first quarter. Although Preeg said in an interview on Thursday that the export decline appears to follow the Chinese government's shift toward promoting personal consumption over investment-driven exports, he cautioned that it will take "another couple of quarters of trade figures" to definitely tie the change to the economic restructuring.

"One quarter is not adequate, because trade figures can bounce around a lot, not only month by month, but quarter by quarter," said Preeg, the senior adviser in international trade and finance at Manufacturers Alliance for Productivity and Innovation, in Arlington, Virginia.

"If you take the whole first half of the year, you still have exports rising pretty rapidly and the whole trade surplus growing," Preeg said. "We really have to see the third and the fourth quarters to see if there's a real underlying change of direction." An examination of second-half figures would be more meaningful because the fall and winter are when China historically accumulates a significant trade surplus on holiday buying in the United States and Europe, Preeg said.

Preeg said China's exchange-rate policy and other governmental actions will affect the data in the second half of this year.

"There is also the question of whether imports of manufactures will continue to experience double-digit growth, higher than GDP growth," the economist said.

Preeg's report also highlighted China's growth over the past several years into an exporter of telecommunications gear, computers, scientific instruments and other high-technology goods, and its diminishing role as an exporter of textiles and other labor-intensive items. "There's been a very broad restructuring of Chinese manufactured exports, which is very positive," Preeg said.

"They are moving up the ladder, as did Japan in the '60s as did South Korea in the '90s. China today is moving up from labor-intensive, unskilled jobs to technology-intensive, investment-intensive high technology industries. That's a good strategy, to become successful in a highly industrialized economy."

China's trade surplus in the past has sparked criticism from US politicians who have accused the country of keeping the yuan artificially low to boost the appeal of its exports. The matter could become moot as China's exports decline.

Preeg noted that through first-quarter 2013, US manufactured imports from China were more than six times larger than US exports to China. But in the second quarter, the ratio declined significantly, to 5:2. Preeg called the change "a welcome shift in the right direction."

"We just can't go on with such a huge and growing trade imbalance," he said. "So the fact it might be leveling off - both sides should say this is a positive turn of events."