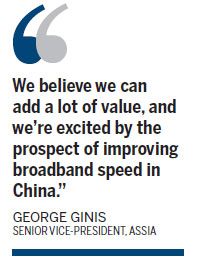 China Unicom Broadband Online announced a strategic agreement with US-based internet solutions company ASSIA to improve internet speed and reliability for 10 million DSLs across 15 provinces. The announcement, which will deploy ASSIA's network management systems, optimization features and other value-added services, follows successful trial runs over the last 18 months, in which ASSIA software successfully boosted the performance of China's copper-based DSL infrastructure, according to the company.

"We're very excited about the Chinese market," said George Ginis, senior vice-president of DSL marketing at ASSIA. "We view it as one of the most important markets in the world, and by far the largest. We believe we can add a lot of value, and we're excited by the prospect of improving broadband speed in China."

ASSIA offers sophisticated platform-agnostic software that is already in use across more than 65 million broadband lines worldwide. The company is recognized for its innovation and leadership in a field that has grown in importance, Ginis said.

"I believe that China Unicom Broadband Online recognized [that] and I believe they also saw evidence of the kind of improvements that can be delivered," he said. "Although I cannot speak for them, I believe it was a business decision made based on the best solution for the particular challenges they're facing."

The China project is still in the planning and design stages, but the company is aiming to debut the improved lines within the next six months, Ginis said. To begin, the company will be collecting additional management and performance data to assess the appropriate avenues for optimization. When the process of installation occurs, it will likely begin in concentrated areas and expand outward at a gradual pace, he said.

Chinese consumers generally have the same goals when it comes to internet connections: reliable, fast service with as little interruption as possible, and with very little effort required on their part, he said. From a business perspective, Chinese providers sometimes have different goals, with lower labor costs making the issue of streamlining the number of people involved in maintaining a network lower priority than in the US, he said. Additionally, with such a large market, providing high-speed internet that will remain sustainable and won't overload the system is essential.

ASSIA had already signed an agreement in 2012 to work with China Telecom Jiangsu, a leading provincial telephone company under the umbrella of the China Telecom network. That announcement included ASSIA's plans to provide line-by-line diagnostics for improved customer satisfaction, and data-rate upgrades.

Chinatown restaurants learn how to get an 'A'

US will host int'l investment summit