It will be the Year of the Horse in China next month, and US retailers now focused on Christmas shoppers are getting ready for the surge - they hope - of Chinese buyers, Caroline Berg reports from New York.

From New York City's luxury shopping veins of Fifth and Madison avenues to outlets across the country, US retailers will be seeking to cash in on the influx of Chinese tourists who will come to the US during the two-week Lunar New Year festival that begins on Jan 31.

"This is a huge population that loves to travel and loves to shop," said Evan Saunders, CEO and co-founder of Attract China, a Boston-based marketing-solutions company. "You want to embrace the fact that you understand their culture, and that it's a holiday where they come from and that might be the reason why they are where they are, traveling abroad."

And the retailers do it with good reason. In 2012, Chinese tourists spent an estimated $7.2 billion on luxuries overseas during their holiday, an increase of 29 percent from 2011, according to the World Luxury Association. Many Chinese travelers buy Western or designer goods abroad because import duties and other taxes add up to 60 percent of the products' prices in China, compared with cities like London, Paris or Hong Kong, according to a report by Quartz.com.

"The Chinese have discovered us," Werner Escher, executive director of domestic and international markets for South Coast Plaza, told China Daily. "They refer to us as a shopping heaven."

The southern California-based retail center boasts the highest sales in the US, bringing in about $1.5 billion annually, he said. Its 250 retailers represent the highest concentration of design fashion retail in the US and feature such luxury-brand stores as Harry Winston, Tiffany's, Cartier, Rolex, Louis Vuitton, Versace, Valentino, Bottega Veneta, Gucci, Hermes, and Dior.

"This will be our fifth year doing the Lunar New Year," Escher said. "We've done the ox, tiger, rabbit, snake, and now this year we're preparing for the horse."

Escher at South Coast Plaza said that due to increased interest among the area's large Pan-Asian community, the retail center's celebration of the Year of the Horse will be expanded with a pre-holiday opening ceremony on Jan 23, and activities that will carry on through early February.

Saunders said that the majority of the 80 or so retail companies his group works with are developing plans for the Chinese New Year.

"A lot of our clients, especially in the retail world, are putting on decorations or themes throughout their stores," Saunders said. "So, when you walk in, you can easily tell they're celebrating Chinese New Year."

He said that about 90 percent of the clients have requested "access to Chinese-speaking retail agents to be on the floor, who know the products, who know the Chinese consumer, and can obviously speak fluent Chinese to them."

Saunders also noted what he said is the high number of Chinese who travel to Boston to spend the holiday with their children who go to school there.

"What we've seen is an incredible number of Chinese students in Boston who do not get Chinese New Year off," he said. "Alternatively, their family back home in China does get the Chinese New Year off, and because most of these families are two parents and one child, and maybe a grandparent or two, it's very easy for them to now travel and visit their son or daughter and make that huge vacation that's family oriented, at the same time without extracting their kid from school."

Over the years, the rate of Chinese visitors in the US has increased steadily by about 35 percent each year, and reached 1.47 million visits in 2012, according to data from China's National Tourism Administration (NTA). Shao Qiwei, the head of NTA, predicts that Chinese tourists will become the leading foreign travelers to the US in 2018.

In general, Chinese tourists are predicted to make 100 million trips overseas in 2014; about 10 million more than this year, according to NTA.

As to shopping, US retail outlets are especially popular among Asians because of low-priced brand-name goods, their concentration of a large number of stores and the easy access to them by public transit or chartered buses.

"Something that we've seen a dramatic increase in is the number of Chinese who are dying to go to premium outlets or outlet shopping areas," Saunders said.

He said one luggage company his company has been working with has seen a significant increase in Chinese purchasing empty bags at outlets near Boston. He said they purchase a new bag to fill with it with items they buy, and then return to the luggage store to buy another bag because they can't fit everything into the first one.

Like last year, many of those outlets across the country are making special preparations for this Chinese New Year, including hiring Mandarin-speaking sales staff, printing brochures in Chinese and offering special bargains when a passport is presented.

In New York City, major stores will again put on the glitz outside and inside for Chinese customers.

For the 2013 holiday, the Year of the Snake, jewelers Harry Winston and Cartier decorated their stores with Asian dcor, including a slithering reptile. Some retailers offered special snake-themed goods, such as a $275,000 snake bracelet and a $9.5 million snake diamond necklace at Bulgari, directly across the street from the Tiffany's.

Bloomingdale's offered red envelopes filled with "bMoney" gift cards, a coupon for a free taro root-flavor yogurt, or a Chinese New Year shopping tote. The gift cards were for $8, $88, or $888, because eight is an auspicious number in Chinese culture. 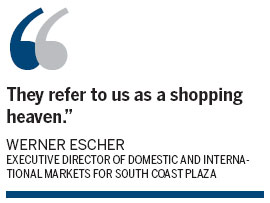 Red envelopes are given as a traditional gift during the Chinese New Year. The long, narrow envelopes decorated with words like "happiness"or "wealth" written in gold Chinese characters are filled with money, gift certificates or coupons.

Brian Buchwald founded Bomoda in 2011 to capitalize on the promising growth he saw in the Chinese luxury market, which surpassed Japan and the US to become the top market in 2012. He said this is a particularly interesting demographic to work with, in part because it is still maturing.

Buchwald said the Bomoda team is working with a well-known retailer in the US to build a special package that combines the Chinese New Year and New York Fashion Week. The plan is to invite Bomoda subscribers to New York to enjoy and get exclusive insider access to the fashion event. Buchwald said itinerary features may include shopping in luxury stores and access to fashion shows.

Chinese tourists are not alone when it comes to a shop-until-you-drop attitude. Asian Americans, many of whom celebrate the Lunar New Year, are also formidable shoppers, and rank as the most prolific and impulsive buyers in the US, according to a Nielsen report released this month.

The study confirmed that Asian Americans are the fastest-growing immigrant group in the nation, with a growth spurt of almost 58 percent from 2000 to 2013. The group boasts a median household income of $63,400 compared with the general population's $49,600, and is reported to be 54 percent more likely to earn incomes of more than $100,000. By 2017, Asian Americans are expected to reach $1 trillion in consumer buying power, according to the Nielsen report.

As to who the Chinese luxury consumers are, they are 14 years younger than their European peers and 25 years younger than American peers, according to a survey published by Milan-based Bocconi University in 2012. Chinese consumers from 25 to 30 years old will be the main spending group in the next three to five years, and women and the new middle class are forecast to become the dominant demographics, according to Jing Daily, which reports on luxury consumer trends in the China market.

Although luxury sales growth in China has slowed by 6 percent since the government ordered an end to frivolous spending by officials on such things as lavish banquets and gift giving, Chinese luxury spending abroad increased 37 percent, according to the global management consulting firm Bain & Company.

About 70 percent of potential consumers search for luxury brands on the Internet at least once a month, and 40 percent consider buying online, according to the company.

"Many of the retailers that Chinese want to visit already exist in China," Saunders said about Chinese tourist spending habits in the US. "The trends have kept up similarly since last year, looking for a lot of these designer products that they can get in China, but are less expensive here in America."

For the 30 and over age group, Saunders said the persisting trend is seeking more traditional brands. On the flipside, however, he said the Attract China team has noticed a younger generation between the ages of 18 and 30 interested in strolling and looking for more boutique shops that may carry upscale designer brands that they may not be familiar with yet.

As luxury perceptions are maturing, Chinese consumers are placing more value on quality, scarcity and craftsmanship, as opposed to amassing luxury brands and logos, according to industry experts who participated in the sixth edition of the two-day Insight Shanghai consumer and design conference in October.

For example, Coach introduced the Legacy Purse to Chinese consumers in 2012 to cater to more discreet preferences. The handbag was designed with simple lines, quality leather, and a modest logotype. Moreover, the recent development of secondhand luxury boutiques has also become popular, according to an article in Jing Daily.

"In the past a consumer might buy something that was the piece that everybody wore," Buchwald said. "Now, we see people peacock a little bit and wear things that their friends may not have."

Buchwald said people may still be buying a $3,000-$5,000 handbag that is still recognizable to a brand's style and craftsmanship, but not as much recognizable for their label.

"Tied to that, we're seeing women and men really learn how to mix and match, so there's no monochromatic LVMH look," Buchwald said.

He said Chinese consumers are learning more about how to pair different brands and understand the trends coming out of Paris, in terms of colors or patterns, instead of dressing directly out of Prada or Hermes look-books.

"China is the future," said Brian Buchwald, founder and CEO of Bomoda - an online community focused on curating luxury fashion and lifestyle for Chinese shoppers worldwide. "You have this huge population base that is very ambitious, that is willing to work hard and has shown massive economic, education and cultural gains in the past one to two decades, and I feel like it's only accelerating."

Sinopec's front woman in the US

Slowdown seen in petroleum use

China,US consider the other side a rival