Seemingly opposite stereotypes about Asian Americans and African Americans have sometimes served to pit the groups against each other, as evidenced by a recent social media exchange about "Asian privilege", reports Kelly Chung Dawson in New York.

In photos of the moments after Malcolm X was fatally shot at Manhattan's Audubon Ballroom in 1965, a bespectacled Asian woman cradles his head. That woman was Yuri Kochiyama, an ally and one of the godparents of the Asian-American activism movement. Like other Asian Americans who had previously joined the Black Panthers, she drew inspiration and support from the rise of civil rights activism among African Americans.

That same year, a change in US immigration policy radically changed the demography of Asian America, attracting large numbers of educated, skilled Chinese workers that set the stage for a 1966 US News & World Report article that heralded the achievements of a "model minority," pitting Asian-American success against the continued agitating of African Americans.

"At a time when it is being proposed that hundreds of billions be spent to uplift Negroes and other minorities, the nation's 300,000 Chinese Americans are moving ahead on their own," the article charged.

In response to Park's #NotYourAsianSidekick-tagged tweets, which spurred a conversation of more than 60,000 participants, a counter-hashtag labeled #AsianPrivilege gained momentum among black Twitter users.

"#AsianPrivilege means being overrepresented at universities then changing the narrative to make it like you [sic] oppressed," tweeted NayNayCantStop. Close Gitmo wrote: "#AsianPrivilege is Indians in an African country like Uganda controlling the entire nation's economy while majority blacks were in poverty." Others argued that as a large percentage of the global population, Asian Americans shouldn't claim to understand the minority experience.

Park created an offshoot discussion tagged #BlackPowerYellowPeril, in hopes of spotlighting areas of tension between the two communities. The tag garnered almost 12,000 tweets, inspiring users like Zellie to write: "#BlackPowerYellowPeril because as much as we want more black representation on television and film, Asian-American Pacific Islanders represent even less." Bessie wrote, "When America writes off black success as a result of affirmative action and Asian success as just being model minority."

For Monica Christoffels, the thread was empowering. "For too long we have been told to not talk to/work with each other," she wrote. "#BlackPowerYellowPeril because white supremacy pits us against each other for its own benefit."

"Asian Americans and African Americans have often internalized the idea of limited resources, particularly among low-income and older generations," she said. "Fighting for your seat at the table can be a survival tactic among minorities. The question now is, how can we create a space for both Asian Americans and black Americans to talk without shaming each other of being unknowledgeable about the other's experiences? Everyone is most knowledgeable about their own experience, and a discussion in which African Americans raise questions about whether Asian privilege exists is important too."

The tension displayed on Twitter is no surprise to those who remember the 1992 Los Angeles riots in which anger in the African-American community following a not-guilty verdict for police officers who in 1991 had beaten Rodney King, an African American, spilled over into violence toward Korean-American shopkeepers. Also contributing to existing tensions was the death of a 15-year-old African-American girl named Latasha Harlins, who was shot in the back of the head by a Korean store owner who wrongly assumed she was stealing orange juice 13 days after King's death.

In poor neighborhoods where African Americans had often been denied small business loans, Asian-American shop owners were collectively viewed as mistrustful of African Americans but more than willing to take their money.

In journalist Helen Zia's 2000 book Asian American Dreams, she alleged that Korean Americans "[took] the hit for all Asian Americans," suffering an estimated $400 million in losses during the riots. 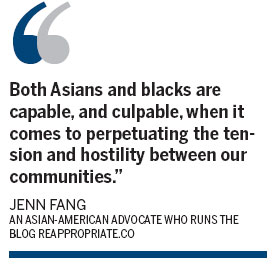 Although the wife of that man, Tiansheng Yu, pleaded with the Chinese community to avoid viewing the crimes as racial, a protest at San Francisco's City Hall saw executive director of the Asian Pacific American Community Center Tammy Tan pin the incidents on ethnicity.

"We don't want to escalate with African Americans, so we don't say it," Tan said in a speech at the rally. "But it is racial. That's fact."

Shortly afterward, New America Media posted an essay by Amanze Eminike, an African American who had as a younger man been taught to target Asians and Latinos for small robberies. He argued that the rationale was rooted in a reluctance to rob other black people, for fear of reprisals. Asian victims were less likely to retaliate and more often carried items of value, he said.

Eminike's account should be interpreted as only one person's experience but is also perhaps indicative of a focus on economic status rather than race, said Jenn Fang, an Asian-American advocate who runs the blog Reappropriate.co. The two descriptors have frequently been viewed as interchangeable in both communities, with long-standing prejudices fueling a stand-still in relations that have remained mostly unchanged since the 1992 riots, she said.

For Asian-American activists, acknowledging that deep-seated internalized stereotypes about African Americans exist within the community may be the first step forward, Fang said.

"I remember the words of my mother who was indoctrinated, from childhood, with the notion that dark skin equated with poverty, disease, laziness and untrustworthiness," she wrote in a post following the 2010 tensions in Berkeley. "I remember my mother who believed that we, as East Asians, shouldn't mingle with anybody who had darker skin than us."

Growing up in Detroit in a family that had observed first-hand violence against an Asian-American shopkeeper by an African-American man, Park was also frequently exposed to anti-black attitudes, she said.

"My parents internalized the idea that the two communities were incompatible, without realizing that we live in a system that benefits some races more than others," she said. "On top of that, I often received back-handed compliments in which white people would imply that even though I was a minority, at least I was a 'good' minority."

The belief that darker skin is less valuable is prevalent in Asia but not uniquely Asian, said Nitasha Tamar Sharma, a professor in African-American and Asian-American studies at Northwestern University, and the author of Hip Hop Desis: South Asian Americans, Blackness and a Global Race Consciousness. Much of that belief is related to the history of Western colonization, and class connotations tied to whether or not a group of people has been forced to labor outdoors, she said.

"Those beliefs are already ingrained, and then for immigrants who arrive in America and are bombarded with anti-black images, being racist against black people can subconsciously feel like a way to be American - and unfortunately, it kind of is," she said.

The instances of overt violence between the two communities are only symptomatic of the effect that small, every-day interactions between African Americans and Asian Americans can have on the way in which people are raised to view each other, Fang said.

"Both Asians and blacks are capable, and culpable, when it comes to perpetuating the tension and hostility between our communities," Fang said. For every sensationalized news item about violence between the two communities, "there are one, two, maybe even 10 daily examples of mistreatment and hostility that never make the press. No one talks about how a simple insult, hurled by a black customer in frustration or anger at being treated like a criminal by an Asian shopkeeper, widens the gulf between both communities."

Asian Americans and African Americans have been racialized in seemingly opposite images, Sharma said. The stereotypes that promote Asians as numerous, de-individualized and machine-like, and African Americans as threatening in their physicality, both serve to define white normativity and to dehumanize those who deviate from the standard, she said. Unfortunately, both communities have more often than not bought into those same stereotypes.

For Asian Americans, the model minority myth has created what Imani Perry, a professor of African-American studies at Princeton University, calls a "gilded cage," in which so-called privilege serves as a barrier to being taken seriously regarding racism. Historically, Asian-American activism has often been met with derision, she said.

Additionally, the history of African-American slavery has in many ways defined the mode in which race is discussed in America, she said. Racial issues are defined as black and white, leaving little room for discussion of other experiences of discrimination.

"Blackness is sometimes viewed as a hegemonic minority identity in America, with the implication being that if you're not black, you can't face racism," Sharma said. "Sometimes there's a fear that if Latinos and Asians say they're oppressed too, then blacks aren't oppressed, when the reality is that there are multiple forms of oppression and class privilege does not eradicate racism."

For Roopika Risam, a professor at Salem State University with a focus on postcolonial studies and minority discourse, the big take-away from the recent #AsianPrivilege discussion is that Asian Americans need to be more precise about their experience of racism, which differs from that of African Americans.

"Unfortunately, Asian Americans are still struggling for ways to talk about our own experience, so we've sometimes leaned on the discourses of black oppression to have that discussion," Sharma said.

In fact, Asian Americans have often drawn inspiration from African-American history and culture, said Ryan Wong, curator of "Serve the People: The Asian American Movement in New York," an exhibition currently at Interference Archive in Brooklyn.

In 1969, a group of young Chinese Americans held a rally to present their own Red Guard Party, a Black Panther-inspired political group with demands including the "removal of colonialist police from Chinatown" and the halt of a planned demolition of a playground for Chinese children. Their actions were later denounced by playwright Frank Chin as a "yellow minstrel show" and a poor imitation of African-American activism.

In 1974 and 1975, black and Latino construction workers and activists participated in Chinese protests against unfair labor practices and police brutality, Wong noted. But Sharma argues that Asian Americans have more frequently looked to African-American activism for inspiration than the other way around.

"Maybe blacks don't need that inspiration from Asians," she said. "They have their own history and forms of resistance, and in some ways probably need us less than we need them, in terms of defining our identity as a strong racial minority. But as a result, Asian Americans have sometimes felt invisible."

Cross-cultural coalitions do exist between the communities, as evidenced in 2012 when various groups including Chinese for Affirmative Action (CAA) and the Black Alliance for Just Immigration (BAJI) worked together to successfully prevent the implementation of a "stop and frisk" policy in San Francisco.

"It was a moment for us to air out what was really happening, and helped start a discussion between people who were essentially neighbors but had never been open to each other," said Susan Hsieh, program manager at CAA. "The crisis created an opportunity to understand where people were coming from, and anytime folks have the chance to actually interact, many of these stereotypes do crumble. That takes time and effort from both sides, but we've definitely seen some improvement in the last few years."

Cooperation between minority groups is crucial in offsetting the natural disadvantage of being a minority in numbers, Fang said. Finding people not of your identity with the resources to advance your cause is more than a nice idea; it's essential, she said.

That the recent discussion on Twitter seemed to only inflame some of those tensions is natural, Park said.

"It was supposed to be messy and complicated, because there are no easy solutions here," she said. "It's a difficult conversation to have in person - let alone on Twitter - but a necessary one."