Chinese President Xi Jinping's four-state visit in South America will help strengthen ties and improve economic relations - particularly in commodities and energy - between the world's No 2 economy and the resource-rich region, say observers.

The US and other nations in the region should look into investing in pipelines, terminals and other facilities for a regional supply chain, said Carlos Gutierrez, chair of Washington-based Albright Stonebridge Group, a global strategy company, and a former US commerce secretary.

"There is a lot that can be done to guarantee that China has the appropriate raw materials and energy to continue to grow their economy."

The energy potential represents an opportunity for China, the US and Latin American countries to cooperate and form an efficient supply chain with their own expertise, said Gutierrez.

This global supply chain "needs to be as integrated as possible," said Gutierrez.

"It's to no one's benefit if China doesn't have enough energy to grow, so we should be collaborating," said Gutierrez.

The four-country visit to Brazil, Argentina, Venezuela and Cuba is Xi's second Latin American tour and his first to South America as president. Last year, he visited Trinidad and Tobago, Costa Rica and Mexico, during which he held talks with the leaders of eight Caribbean countries. 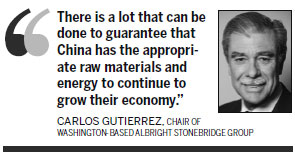 During Xi's four-state visit, he will attend the sixth BRICS Summit and the China-Latin America and the Caribbean Summit in Brazil. The BRICS - Brazil, Russia, India, China and South Africa - are also pushing for establishing a development bank for the bloc which will serve as an "emergency reserve fund" utilized by members in case of a financial crisis.

China's trade with the region has surged along with its economic growth. China's increasing purchases of commodities and exports of manufactured goods to the region have boosted the two-way trade with Latin America to a total of $261.6 billion last year, according to China's customs.

China and Brazil - two leading emerging economies - are the largest developing countries in their own hemisphere within the BRICS, which accounted for 21 percent of the world's total GDP in 2013. Argentina, an exporting source of soybeans for China, said it wanted "big trade" with China back in April. China has become the second largest trading partner of Argentina and the South American country is the sixth largest trading partner of China in the region. Two-way trade between the two nations amounted to around $14.5 billion in 2012.

"In Brazil and Argentina I can see some real win-win opportunities and maybe there are some ideas for Cuba and Venezuela, but it's hard to put them in the same camp economically," said Gutierrez.

While natural resources have been a key part of China-Latin American relations, there are a lot of opportunities in the consumer markets, said Bart van Ark, chief economist at business research group The Conference Board in New York.

"China remains a great opportunity for these economies to continue to export to," said Van Ark. "Latin American countries need a lot more openness and that will make them more competitive and produce more trade with China."

A win-win model for China-Latin American relations will come from China's contribution to helping the region in infrastructure development; something similar to what China is doing in Africa, said Ken Goldstein, an economist with The Conference Board.

"By helping improve the infrastructure of the domestic economies (in Latin America), it increases the potential market for goods and services coming out of China," said Goldstein.