Communities in California have become the nation's hot spots for Chinese seeking houses. Many pay all-cash and above the asking price, causing prices to soar and closing the door for other buyers, Amy He reports from New York.

And in many areas of California "cash, cash, cash" can be added as Chinese who have it are spending it, be it to knock down a simple ranch house and put up a mansion, or buy a mansion.

Los Angeles area communities are among the hottest of the hot spots in the current US buying spree. The results are soaring property prices, the fattening of local treasuries from increased property taxes and often the shutting out of would-be buyers seeking to use conventional financing.

And it's not limited to California. Juwai.com, a Hong Kong-based website that connects Chinese buyers with US properties, adds New York and the Seattle area as othe hot spots.

"Residents have become used to postcards offering immediate, all-cash deals for their property and watching as 8,000-square-foot homes go up next door to their modest split levels. For buyers from Chinese mainland, Arcadia offers excellent schools, large lots with lenient building codes, and a place to park their money beyond the reach of the Chinese government," said the article, Why Are Chinese Millionaires Buying in an L.A. Suburb?

Arcadia isn't alone; add nearby San Marino (4 miles away), Irvine (48 miles) and other communities in a state that Chinese find particularly attractive because of its climate, closeness to their homeland and large Asian populations.

Angela Wong, a Los Angeles-based Realtor, said San Marino is widely known among Chinese as the "Chinese Beverly Hills". "They like this neighborhood because of the schools - that's their No 1 priority," she told China Daily.

Many schools in the San Marino area have after-school programs that offer language tutoring in English and Chinese for immigrant children. There are also numerous Chinese restaurants and supermarkets in the city, making it easy for the Chinese to maintain similar lifestyles they had in China.

"It's also very pretty. There's very easy access to Newport Beach, which is good for the really wealthy Chinese because they can park their boats over there," added Wong.

She said San Marino is so desirable that Chinese will bid up the price of a house to get what they want.

Wong said she recently showed a $2.38 million property in San Marino to a Chinese buyer who initially bid $2.4 million, but will probably pay $2.5 to $2.6 million to get the house.

"Prices have never fallen, even during the financial crisis," said Wong, vice-president of international marketing in Asia at Ewing and Associates Sotheby's International Realty.

And she said the same can be said about Irvine, where the 2013 Census estimate put the population at 236,716, with 39 percent Asians.

"The prices have increased by the month instead of by quarters or six-months. Whereas in the so-called 'white areas' where Americans live, the prices have not gone up so much just because the competition is mostly not from the Chinese. This is a really a Chinese-desirable area and the prices have gone up at least every month 3 to 5 percent," she said.

"Prices are just where supply and demand cross, so if you have a bunch of people suddenly deciding they want to buy into Los Angeles that weren't there before, that's extra demand, so prices will go up," said Alex Chinco, assistant professor of finance at the University of Illinois at Urbana-Champaign.

Wong said 90 percent of her clients pay with cash, including a $14 million deal that she said she just completed in Hawaii.

John Wong, co-founding chairman of the Asian Real Estate Association of America (AREAA) (and no relation to Angela Wong), said that Chinese buyers and the sellers prefer all-cash purchases.

"There's been a lot of challenges for domestic buyers who require getting loans and competing with a lot of these all-cash offers," he said. "That has driven up prices because you have these individuals who have the capability of paying all cash coming into the market."

Higher-income buyers and cash buyers are pricing out first time buyers, said Susan Wachter, professor of real estate and finance at the Wharton School of Business of the University of Pennsylvania.

"When you talk about higher income buyers, it's not just buyers from China, and it depends on the market, but buyers from China are certainly part of it. In those markets they are the drivers," she told China Daily.

There have always been all-cash buyers in the US looking to purchase a first or second home, and they often seek a discount. But now Chinese buyers paying cash are not seeking a discount and often go beyond the asking price, pushing out other buyers. There are also multiple all-cash Chinese buyers bidding after the same property, contributing to rising costs, according to Wong of the AREAA.

He said his wife is also a real estate agent and that she had two Chinese buyers recently pay cash. "When they made their offers, both were $100,000 over the asking price - and this was in San Francisco - and both of them closed escrow within 10 days," said Wong, who is also a San Francisco-based real estate agent and a broker associate at Better Homes & Gardens Mason-McDuffie Real Estate.

While all-cash buyers are desired by sellers and agents, those seeking to finance with a mortgage - even foreign buyers - are finding many lenders have become more stringent with financing requirements, said Arthur Hung, senior global real estate adviser and Realtor at Sotheby's International Realty in New York.

Many Chinese initially inquire about financing, only to find it's very difficult to get it, either because there is a loan limit on the purchase or the application process requires a lot of documentation that the buyers cannot provide, he said. "Or the processing time will be so long that it affects the closing and it's not possible for the seller, so a lot of people will - even though they initially ask about mortgage financing - pay in cash."

Key real estate markets in the US have bounced back since the financial collapse in 2008 with the bursting of the housing bubble, but many have recently slowed.

The National Association of Realtors (NAR), a trade group, said in an August report that home prices increased 4.4 percent in the second quarter of 2014 compared to a year before, the slowest growth since 2012. But markets where Chinese buyers are key players have not seen prices slow, said Wachter.

"Several markets where Chinese investment is particularly important, [prices have] not slowed. These markets continue to accelerate. So depending on the market, investment from China has been responsible for rising prices," she said. "In real estate, the marginal investor is the investor that gets the property, and determines pricing in the market. Investors from China often are that marginal investor that's bidding on the property, has the highest bid and is in fact setting prices in that market."

Real estate is priced by what the market is willing to pay, and the highest bidder determines the price of a property. In many markets, particularly on the West Coast in cities like Vancouver or San Francisco, bids are backed by investment from China and, therefore, the Chinese are determining the prices in those markets, Wachter said.

In June, the NAR said that between April 2013 and March 2014, foreign buyers contributed $92.2 billion in sales volume, roughly 7 percent of total US housing market sales.

That was a 35 percent increase from the prior year, which beat a previous $82.5 billion record in 2012, and was due in part to a 50 percent jump in Chinese-buyer activity, the NAR said.

The association estimated that total international sales from Chinese buyers rose to $22 billion in the 12 months ending in March 2014, up from $12.8 billion in the prior period. "This accounts for about 24 percent of the total international dollar sales," according to the report. It said that 51 percent of Chinese purchases were in California, Washington state and New York City, and more than 70 percent of those were all-cash purchases.

The data compiled from 3,547 surveys conducted with international buyers in the US between April and May of 2014 showed that about half the purchases made by the Chinese were for vacation/residential properties.

Chinese accounted for the largest sales-dollar volume, the NAR said, because they tended to purchase properties in higher-priced markets along the coasts.

China is the fastest-growing source of clients in the US, and the second-largest foreign buyer group, right behind Canada and in front of Mexico and the UK, according to the NAR. 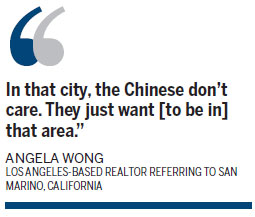 "Chinese purchases are across the board - it's commercial, condos, residential, and there's also absolutely commercial investment," Wachter said.

Chinese companies and individual investors are increasingly looking to diversify their assets and US real estate is seen as largely a safe investment.

"The US is not only a diversifying asset, it appears to be the best of both worlds: the US market is growing, and at the same time, it's a safe market to invest in," said Wachter.

" The market in China appears to be soft and in many markets in China, prices are falling, so there's great uncertainty. There's less uncertainty about pricing in the US market than in China at this moment," she said.

"In a world where interest rates are as low as they are, single digit returns at the 3 to 4 percent level are excellent returns. That's why Chinese are choosing to invest in real estate here," Wachter said.

Real estate prices are also cheaper in the US than they are in China, another reason why Chinese buyers are attracted to the US market.

"[It's] significantly cheaper. Maybe in New York, it'll be three-quarters the price of what you can get in Beijing and Shanghai, and it has been this way for many, many years," said Wong of AREAA.

But experts have been cautious to say that the Chinese are not necessarily creating a housing bubble, despite what some media reports have claimed.

"A bubble is too strong a term at this point, but we can see that prices are increasing, and in some markets, they're exceeding levels at the previous high," Wachter of the Wharton School said.

"It's not a bubble in a classic sense - prices have to collapse from where they are now. There's nothing in the mechanics of where prices are today that's pointing to a necessary collapse in the next year or so," Wachter said.

Chinese buyers are all-cash buyers who often don't take on as much debt, and if they do, they are paying 35 to 50 percent down payments, Wong said.

Alibaba's Ma heads for Hollywood in search of content