The lack of a formal extradition treaty between the United States and China is not a complete impediment to the repatriation of Chinese fugitives hiding out in the US, according to attorneys. There are alternatives.

Last year Chinese officials said more than 150 "economic fugitives", many of them described as corrupt government officials, were in the US. Neither country has publicly provided figures on how much stolen money has been smuggled out of China and into the US.

The Washington-based Global Financial Integrity group, which tracks illegal outflows from countries, estimates that between 2003 and 2012, $1.25 trillion of illicit cash left China.

Nearly 700 fugitives suspected of economic crimes have been repatriated to China as a result of Fox Hunt, according to China's Ministry of Public Security.

Those 700 fugitives had been hiding in 69 countries and regions, according to the ministry, including the US, Canada and Australia. More than 115 of those returned to China had been at large for more than a decade, Ministry data showed.

When the Fox Hunt initiative began, Chinese police issued a priority list and asked for help from law enforcement authorities in 90 countries and regions around the globe. More than 70 Chinese police teams were sent overseas to support the operation.

Since then, most countries have actively cooperated in the investigation and repatriation of fugitives, Meng Qingfeng, assistant public security minister said.

However, China does not have extradition treaties with the US, Canada and Australia, a fact that has made the countries more popular as destinations for Chinese officials fleeing the country.

The three countries have cooperated with China in the hunt for fugitives and stolen assets, Meng said.

"As long as people remain at large, the hunt will go on," Meng said, stressing there was "no safe haven" for suspects.

"The six-month drive, supported by 70 special investigation teams, has been a major breakthrough in the country's wide-ranging crackdown on corruption," he said.

The lack of an extradition treaty between China and the US was a topic of discussion among a group of Chinese and US delegates meeting in the Philippines last month as part of an Asia-Pacific Economic Cooperation international working group.

"There are alternatives to extradition," said David Luna, the State Department's senior director for national security and diplomacy.

Some of those recourses include the United Nations convention against Corruption, and the UN convention on Transnational Organized Crime. Other alternatives include deportation for violations of US immigration law. 、

Frank A Rubino, a criminal defense attorney, based in Coral Gables, Florida, said the most important feature of any potential extradition treaty is the mutual nature of the agreement.

Two of the most important parts of any extradition agreement are: (1) the requirements for countries requesting extradition of an individual, and (2) the list of extraditable offenses covered by the bilateral agreement, Rubino said.

Erich Ferrari, principal attorney with Ferrari & Associates PC in Washington, said one of the primary themes of extradition law is the concept of ‘dual criminality,' or what types of offenses are extraditable.

"That is kind of the bedrock of extradition law," Ferrari told China Daily in a phone interview. "One of the primary things they're going to be looking at is: Does China have the corresponding criminal statute for us to prosecute and make it an extraditable offense."

Page Pate, founder of The Pate Law Firm in Atlanta, said criminal activity crosses borders routinely, so there are many cases here in the United States that involve fraudulent activity in other countries.

"The more common thing that has come up, especially with China and these allegations of government corruption, is whether that individual is here in the US illegally or has overstayed his/her visa permissions," Pate said.

"If that's the case, then immigration detention in the US is certainly possible, and the person could be deported - not because of a pending criminal case but because of some violation of US immigration law," Pate said.

Luna said talks between Chinese and US officials will reconvene in the Philippines in August, with law enforcement and legal experts from both sides set to take part in the new round of discussions.

The meeting in August will center on how to share specific intelligence information, potential ways to send fugitives back to China, and possible joint investigations.

Luna said although there is no formal agreement to return stolen assets to China, the issue is a "priority" that is "part of an ongoing bilateral dialogue".

Douglas McNabb, an international criminal defense attorney who specializes in extradition cases, said China has other recourses in its effort to repatriate offenders.

"China is a part of Interpol, so they can request a red notice, which is like an international arrest warrant that's sent to 190 countries for a particular individual," McNabb said.

"So the red notice is important in the sense that it tries to locate an individual, but the filing of a red notice is a separate process from extradition," McNabb said,

At the beginning of 2014, more than 150 corrupt Chinese officials under Interpol red notice warrants were believed to be at large in the US, according to the Ministry.

Reuters contributed to this story. 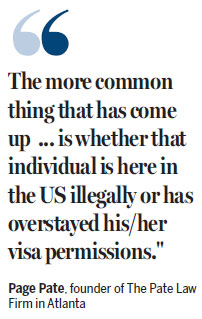 Fireworks on Hudson tonight to usher in Chinese New Year

Met museum to focus on China