Asia has more millionaires than US: study

Led by China and India, Asia had more millionaires than the United States and Canada in 2014, according to a wealth management study.

The study, done by the Capgemini consulting concern and RBC Wealth management, found that the number of high net-worth individuals (HNWI) increased by 11.4 percent to 4.67 million in the Asia-Pacific region, about 6,400 more than in the US and Canada. HNWIs were defined as those with investable assets of $1 million or more.

China and India have propelled Asia-Pacific HNWI growth in recent years and are expected to continue to act as drivers both regionally and globally despite recent market volatility, according to Michael Yong-Haron, head of North Asia for RBC Wealth Management.

"These two markets represent nearly 10 percent of global HNWI wealth, and account for 17 percent of the global increase in new wealth since 2006, adding $3.2 trillion during that time. Of the $7.4 trillion of HNWI wealth added in Asia-Pacific since 2006, India and China accounted for 43 percent," Yong-Haron said Wednesday.

Both China and India, where 1 out of 3 people in the world reside, have experienced rapid economic growth.

Data in the study do not include the stock market selloff in China over the summer. "The high net worth population and wealth data in the report is based on year-end values, and with a quarter of the year still remaining in 2015, it is too early to make a judgment on whether there will be any persistent and/or long-term market decline in China that could impact the wealth forecast that we make in the report," Yong-Haron said.

The study indicated that the wealthy in Asia tend to have more cash and borrow more, especially for investments.

"The report showed that cash remains the largest asset class in Asia-Pacific (excluding Japan), setting the region apart from the rest of the world where equities are dominant. Keeping cash on hand provides financial security in case of market volatility as well as helping with any lifestyle demands.

"Compared to their peers globally, Asia-Pacific HNWIs like to hold credit in their portfolios. HNWIs in China are especially interested in credit for investments, with nearly 68 percent of credit used for investments. The use of leverage has always been high in the region, partly because many of the HNWIs are business owners who feel comfortable using credit," said Yong-Haron.

Even though Asia inched ahead in the number of HNWIs, North America retains the most money, with 28.8 percent of the $56.4 trillion of wealth in the world held by the affluent, ahead of 28.1 percent in Asia-Pacific and 23 percent in Europe. 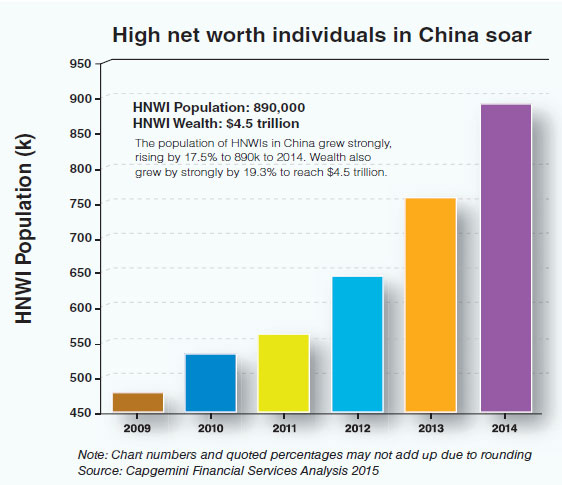 Sequel of Crouching Tiger's underway but without Ang Lee

Action on climate heats up in LA