The state of Maine, whose biggest exports to China are seafood, especially lobsters, and wood, is sending a trade delegation headed by its governor to China at the end of this month in search of deals for the state's services industry.

Governor Paul LePage, the Maine International Trade Center (MITC), and the US Commercial Service will be joined by a delegation of about two dozen people from the food, environmental and educational sectors on a week-long trip to East Asia from Oct 24 to Oct 31, where they will visit Shanghai. Then those in the seafood sector will head to Qingdao on China's east coast for a fishery tradeshow.

China is Maine's second-largest export market after Canada. Last year's those exports totaled $183, down from the $247 million in 2012, the last time the state went on a trade mission to the country. As of August 2015, the state's exports to China totaled $141 million.

Wood products, which include wood pulp-related goods and paper goods, make up the majority of Maine's exports to China, followed by seafood.

"We know clean tech is a priority - it was a priority during Chinese President Xi Jinping's visit to the United States a few weeks ago. I know there was talk during that visit on how US and Chinese businesses can collaborate on renewable energy technologies as well as efforts to combat climate change," said Jeff Marks, executive director of E2Tech, a non-profit organization of business associations in the environmental, energy and clean technology sectors.

"Maine's clean-tech sector is the fastest-growing technology sector in our state. It has an annual economic impact of about $1.2 billion, about 12,000 jobs annually, and clean energy is really the backbone of this growth," he said. "Maine has pretty incredible indigenous wind, biomass resources, and while we can't export our wind and water, we can export the products that take advantage of those resources as well as the expertise that's generated through uses of those resources."

Educational institutions, such as the University of Maine and the University of Southern Maine, are joining the trade mission to look for potential partnership opportunities in mutual areas of research interest, primarily in ocean sciences and marine technologies. The universities are looking to attract Chinese student enrollment.

As for lobsters, China's growing middle class has been a boon to the lobster trade because a steamed, whole crustacean flown in live from the United States is not just a festive delicacy that they are willing to pay a lot for, but it also is considered a good-luck symbol because of the bright red color of a cooked lobster.

China has no lobster industry and has been relying mostly on Australian imports, though a decrease in supply in there has led to a surge in US exports of the crustacean to China. Prior to 2009, the US shipped less than 500 metric tons of lobster to China; last year, it shipped 8,500 metric tons.

"The Chinese market has, I wouldn't say supplanted the European market, but it certainly has become a much, much more important market," said Wade Merritt, vice-president at MITC. 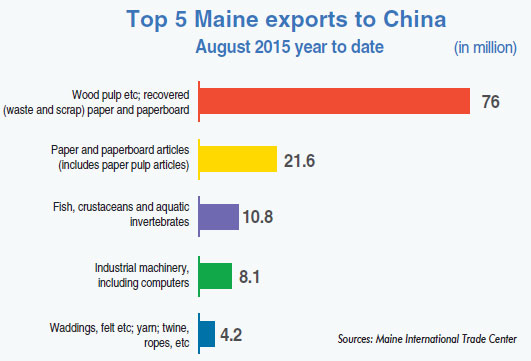