China's Performing arts in the US

China's creative artsare enjoying a new springtime, and it's busting out all

over, both at home and abroad. But what will it take for it to really take

root in the US, NIU YUE reports from New York.

"The performing arts industry in China is now entering its best stage of development," Lyu Yuzhong, deputy director of the Ministry of Cultural and Art, said recently. "Our leaders and government value culture and artistic inheritance tremendously."

With box office revenues in the performing arts reaching $2.54 billion in 2015, a 9 percent increase over the previous year, "China now is one of the biggest performing arts markets in the world", according to Pan Yan, general secretary of the China Association of Performing Arts (CAPA).

"But the number is not significant given the size of the country and its population," Pan added. "There's a lot of room for improvement."

And that means outreach, in China and beyond.

Wang used an analogy: It's difficult and impractical to ask foreigners, who are bread eaters, to change their habits and eat Chinese buns.

"What we can do is promote exquisite and authentic buns to the world so the elite of Western mainstream society can have a change in diet," he said.

Cultural differences can sometimes seem like an impenetrable barrier for Chinese practitioners in the performing arts industry.

"For any performing arts offering from overseas, the first challenge is: Will the material fit the tastes of the local audience?" said Zhou Wei, president of Weiber Consulting, a New York-based marketing and public relations firm with experience working in Chinese and Asian markets.

"To be really competitive in the US market, the Chinese side needs to understanding consumers' behavior and desires," Zhou added.

From what she has seen, many times an arts group will assume that their performances will be welcomed by local audiences, and just come to the US and present without doing any decent market research in advance. The results can be disappointing, as audiences don't always take to those cultural differences, she explained.

Cathy Barbash, who has been involved with Sino-US performing arts exchanges for more than 30 years, said the challenge for China's performing arts will be to find and encourage (as opposed to purposely develop) projects and programs that are so universal that they can meet domestic imperatives without becoming didactic simulacra of Chinese culture, and, thereby, also attract the interest of the international marketplace.

"The Chinese side should be willing to learn to compromise, to make changes to fit the needs of this market," Zhou said. "Many Chinese performances look reasonable by Chinese standards, but if we put them on stages in the US, many things need to be adapted."

"Chinese performing artists are the new kids on the block in the US. So how to understand the market, how to bring the right content and context and how to package it to come in line with the local audiences' preferences - these are important lessons they need to learn," Zhou said.

Zhou gave an example that she thinks serves as a model for success: the multi-cultural modern dance performance Pearl presented at Lincoln Center last August.

Inspired by the life of American writer Pearl S. Buck, the first woman to win both the Nobel and Pulitzer prizes, known for her books about China.

The production was produced by Beijing-based Legend River Entertainment, along with Zhenjiang Media Group, but it was developed and created in the US by Academy Award-winning choreographer Daniel Ezralow, with a score by Japanese composer Jun Miyake and an international company of 30 dancers.

"The production was created based on a story about an American who grew up in China, which was already a cultural bridge between East and West," Zhou said. "The Chinese producer hired a strong US developing team, who fully understood American audiences' tastes and had the skills to make the show a success in such a competitive corner of the performing arts."

The New York Times praised the work as "an ambitious dance-theater work a rare breed in both form and content."

Last April, the International Conference for the Promotion of Chinese Cultural Products hosted by the Department for External Cultural Relations, Ministry of Culture of China and conducted by China Association of Performing Arts was held in Enshi, Hubei province.

At the conference, David Fraher, president and CEO of Arts Midwest, a non-profit performing arts agency that has been arranging projects with Chinese groups since 1999, gave a few pointers to Chinese performing arts groups on exporting their acts overseas.

Fraher said agencies like his Arts Midwest were willing to introduce outstanding Chinese performing arts to the US. But because of cultural differences, the productions they preferred were those that are clear and simple and rich in artistic content, rather than grand sweeping narratives or shows that require complex technical support.

The scale of the production is a primary consideration for foreign partners, Fraher said. The cost for a tour of a large-scale performance is usually too high to comply with local groups' "cost-benefit rules" and can only happen if the government underwrites it. As a rule of thumb, he suggested a tour company of no more than 35 members would be best for both sides to work with.

To enter the US market, Fraher recommended assembling a professional international planning team and give it all the time it needs.

That kind of information allows US-side partners to fully understand the production, which helps them publicize and promote to potential target audiences before and during the tour.

If it's possible for the artists to share their artistic experiences and thoughts with audiences and conduct workshops and seminars with local talent, all the better for cultivating the overseas market, Fraher added.

"Diversity is key," said Alison M. Friedman, founding director of Beijing-based Ping Pong Productions, which specializes in cultural diplomacy. "The more diversity of individual artists there is, the more fruitful and flourishing and sustainable China's arts market will be. The more flourishing China's arts market becomes, the more likely there will be strong and unique works of art to travel internationally."

"China's artists are incredibly talented, but without professional producers to be the managers, organizational brains, and bridges to the rest of China's growing market and out into the world, those talented artists will stay talented but locked in their own little studios," she said.

"So the next stage is not just to keep encouraging diverse individual artistic voices to flourish in China, but also to develop the producers and infrastructure to support those artists to reach more and more audiences, both in China and the rest of the world," she said.

According to many US experts, "presenter" agencies are the best way into the US market.

The Association of Performing Arts Presenters (APAP), the largest organizing body of performing arts presenters in the US, held its annual conference in New York City in January.

The Chinese delegation not only exhibited their productions in booths, but also invited American arts alliances, booking companies and presenters to attend a promotional seminar on Chinese performing arts and discuss building marketing channels for international cooperation.

Wang, who attended the APAP conference, thought the opportunities for China's performing arts were still limited, so the number of deals reached by the two sides was relatively small.

Wang suggests that because the conference is an occasion for closing deals rather than reaching deals, the Chinese delegation should have been better prepared.

Wang said for most of the delegation, it was their first time to attend the conference. "They had language difficulties and few contacts, so the productivity was quite low. Before coming overseas to a conference like APAP, we should have a planning meeting at home to coordinate a strategy, make appointments with high-level potential partners in the US, and then attend the conference as a group. That would help us break into the circle faster."

Friedman said a big part of her job is educating US presenters about the diversity of contemporary Chinese art and presenters in the US, much like presenters in China, are worried their audiences aren't open to certain international art forms.

But "I've found the opposite is true," she said. "Audiences are open and ready, but you need to communicate very clearly what it is you're bringing."

'It indicates the performance quality has improved, marketing methods have grown more mature and getting closer to Western audiences' tastes,' said Winston Wang, deputy director of cultural exchange division of China Performing Arts Agency (CPAA). 'There has been a great increase in the number of China's performing arts products exported in the past few years.'

Wang's group used to dominate the market, but with China's administration being simplified and power and decision-making percolating down to lower levels, it is no longer performing arts' only door to the outside world.

Many organizations and companies, whether government operated or private, have been evolving in the industry, with more performing arts troupes assigned overseas, 'which is a good sign', Wang said.

'The exchange has expanded a lot in both number and range,' said Zhou Wei, president of Weiber Consulting, a New York-based marketing and public relations firm with experience working in Chinese and Asian markets.

The company's recent projects include bringing the National Ballet of China to perform at the 2015 Lincoln Center Festival and producing the New York Philharmonic Chinese New Year's celebration concert.

'But it's a fact that no matter what level the performance is, it cannot survive without government support. Dragon Boat Racing had support from the Guangdong provincial government and The Legend of Mulan from the Hong Kong (SAR) government,' Zhou said.

She said that to supplement government help, Chinese producers are looking for overseas partners.

They did it with the help and guidance of the Philadelphia Orchestra and the Chicago Symphony Orchestra, which had previously collaborated with the CNCPAO on China tours. 'Such exchanges and cooperation between orchestras, dance companies and arts festivals of the two countries are common,' Zhou said. 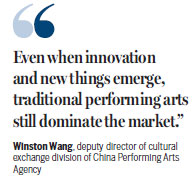