SF's new 'made in China' bridge opens to rave reviews 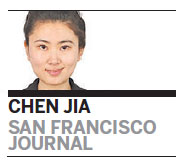 California architects, think tanks and Chinese community leaders are all applauding the newly opened "made in China" Bay Bridge between SF and Oakland.

"It became clear that China had advantages in the area of large scale bridge building," Jeffrey Heller, the president of Heller Manus Architects, told China Daily on Wednesday. "My experience of working in China made me an advocate, along with others, of supporting the opening up of the bidding to allow foreign bids for the SAS (Self Anchored Suspension) portion of the project."

As an architect and urban design member of the Bay Bridge Design Advisory Panel, Heller was deeply involved in the decision to make the bridge a unique single tower SAS structure.

The reasoning behind the decision was to create visual harmony with the main bridge, and also to ensure a world class unique design, he said.

As the design and construction progressed, it became clear that the cost and feasibility of the SAS was in question, due to the complexity and scale of the structure.

The State of California had made a rule of American steel only, and problems arose about not only cost, but also the technical capacity to build such a structure in the US without some special revision of existing steel fabrication facilities.

California officials contended that the US did not have the manufacturing capacity or the workforce to build such a project on its own.

The new San Francisco Bay Bridge used entire sections of the span constructed in China and then shipped to the Bay Area for assembly. Shanghai Zhenhua Heavy Industries Company Limited (ZPMC) bid for the project, which triggered a dispute in California.

ZPMC is a famous heavy-duty equipment manufacturer, and a state holding company listed on A and B shares on the Shanghai Stock Exchange. The major shareholder is China Communication Construction Co Ltd, which is one of top 500 companies in the world.

The new eastern section comes two decades after the old bridge partly collapsed in the 1989 earthquake and after years of delays and cost overruns. The new replacement span is designed to withstand the strongest earthquake to occur at the site over a 1,500-year period. It's expected to stay within its current budget of $6.4 billion.

"It was clear that that strategy was beneficial, because the Chinese bid saved a lot of money, and the complex fabrication was well served by the Shanghai fabricators," Heller said.

He was on a trip with Governor Arnold Schwartzenegger's delegation when he came to China and visited the production facilities.

"Ultimately, as someone working deeply in China on architecture and urban design projects, I am very pleased to see the two-way nature of the relationship between California and China," he said.

"It has been closed for a long time, and the fact that the bridge represents a very positive and visible chapter in that relationship pleases me," he added.

Bob Berring, a professor at UC-Berkeley, told China Daily the Bay Bridge serves as "physical proof of what China and the US can do when working together".

Some commentators bemoan the fact that California had to turn to China to construct large elements of the bridge, but such a view is provincial, he said.

He said the bridge is a symbol of the new world of global interaction, which may also serve as a bridge to China-US cooperation in the future.

"China has centuries of bridge building experience and in recent times has been building spectacular bridges over open water much longer than the Bay Bridge in a mere fraction of the time," said George Koo, a Chinese community leader in the San Francisco Bay Area. "They should have brought in the Chinese sooner."

The original Bay Bridge took three and a half years to build. Just the new eastern section took over seven times as long to complete and was way over budget.

Bridge-building officials finally contracted a major part of the bridge to China in order to bring the runaway budget under control and finish in some timely manner, he said.

"With the opening of the San Francisco Bay Bridge, key Chinese companies are considering stepped-up investment in the US, particularly in infrastructure, and the White House is encouraging them to move ahead," said Stanley Kwong, a professor at the University of San Francisco.

"These projects are part of China's continual move up the global economic value chain - from cheap toys to iPads to jetliners - that China is aiming to become the world's civil engineer," he said.