President Barack Obama has canceled the White House's decades-old reservation at the Waldorf-Astoria New York hotel, which was recently purchased by a Chinese insurance company, according to CBS News.

A South Korean consortium announced last month that it was buying the Palace. CBS News said Palace officials had confirmed that the White House has booked several floors for the UN meeting.

The White House did not respond to China Daily's request for comment, while a State Department official on Monday would not comment on the issue. 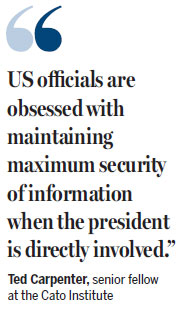 The Waldorf was acquired by the Anbang Insurance Group for $1.95 billion last year, and the switch in hotels has been speculated in news reports for weeks.

Ted Carpenter, a senior fellow of defense and foreign policy studies at the Cato Institute in Washington, said the US decision on a hotel switch certainly could increase the perception that the United States is hostile towards Chinese investment in America.

"But in this case, I suspect that the motive is more specific. The president and his national security team would worry that staying at a Chinese-owned hotel could increase the potential for sophisticated espionage directed against the presidential party," he said.

"That fear is probably excessive, but US officials are obsessed with maintaining maximum security of information when the president is directly involved," he said.

Carpenter said only if this move is followed by other actions that suggest a broader hostility towards Chinese-owned businesses operating in the United States would the confidence of Chinese investors be shaken in a serious fashion.

On June 17, The Associated Press cited unnamed State Department officials as saying hundreds of American diplomats and staff would use the Palace instead of the Waldorf for the General Assembly meeting.

AP said the officials didn't give a reason for the switch, but pointed to the sale of the Waldorf to the Beijing-based Anbang Group in October 2014 by Hilton Worldwide Holdings Inc. US officials said then that it might affect the government's longstanding relationship with the hotel, and that a decision would be made on cost and potential security concerns connected to Anbang's plans to renovate the hotel.