A trip to China changes a state's education

It all began with a trip to China in 2006. As a result, today 13,000 students in the state of Utah in grades K-12 speak Mandarin, the highest ratio in the US population.

And the person who made that trip and then changed education profoundly in Utah and potentially in the United States is Howard Stephenson, a Utah state Senator since 1992.

"I was stunned by the higher knowledge level of the Chinese high school and college students during my conversations with them. Their dream for better life, their drive and ambition, their depth of world knowledge gave me such an impression that as a state senator, I was deeply concerned about our education system after I talked to them," said Stephenson in a recent interview with China Daily.

"Our (American) children would never grow up and become world leaders if we do not take initiative to learn other languages and cultures immediately, especially Chinese language; and we as a country would not sustain our world leader position if our next generation does not step up."

In 2008, Stephenson proposed a bill to implement dual language immersion (DLI) education to teach Mandarin in Utah public schools. The Utah Legislature passed the bill and Governor Jon Huntsman Jr - who would serve as US ambassador to China from 2009 to 2011 - signed it, making Utah the first state to fund such a program. 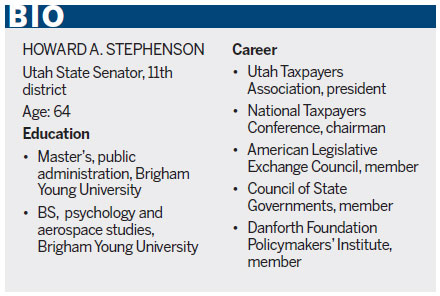 The International Education Initiative - Critical Languages Programs provide a total of $270,000 for the dual language immersion program. It called for 50 percent of school day instruction in English and 50 percent in the target language, beginning in kindergarten or first grade with the intention of adding one grade each year.

For the fall 2014, 118 programs and 25,000 students are enrolled in Chinese, French, German, Portuguese, and Spanish immersion; Mandarin is among the top choices. The students study two languages, exposing them to two cultures and two perspectives. Programs begin in elementary school with an articulation of dual-language immersion continuing through university level studies.

According to Stephenson, the legislature appropriated $120,000 initially in 2007 for the Chinese language study for 20 public high schools statewide, about $6,000 for each, just enough to buy classroom materials.

A 2013 study by the Utah state office of education shows that in 2009 there were 1,400 students in 25 DLI schools. In the current school year 2013-2014, 20,000 students are enrolled in 98 DLI schools. Seven Utah universities have also partnered with the state education office to help train future teachers of immersion.

Stephenson is the middle child of five in his family. He was raised by a single mother and grew up in southern rural Utah. His father abandoned the family when he was eight, leaving five children under the age of 11 and their mother without financial support. The family of six lived in a two-bedroom apartment and his mother went back to college. She obtained teaching credentials and became a second grade teacher to support the children.

"I remember my mom came home one day and asked all of us to leave the house. 'I need a nap, a half hour of sleep so that I can be your mom again for the rest of the day,' she said. So we all tiptoed outside to give her some rest," said Stephenson, who praised his mother as "extremely strong and an amazing human being."

Stephenson decided that he wanted to become a state Senator when he was 13.

"I happened to hear Ronald Reagan speaking on television when I was 13. He had a fundraising video named A Time for Choosing, a campaign fundraiser for a candidate who was running for president. He basically said that government should not do everything and should leave it for individuals to enjoy their freedom in creating new ideas and businesses. That idea really struck me and became my belief too."

With a BS in psychology and aerospace studies and master's in public administration from Brigham Young University, Stephenson's first job and only job before he entered politics was at the Utah Taxpayers Association, a lobbying group that seeks to persuade the state legislature, local schools, counties and cities to avoid tax increases. With a passion to ensure that taxpayers get the full benefit for their tax dollars, especially in education, Stephenson was elected a state Senator when he was 42, representing District 11, which includes southeast Salt Lake and northern Utah counties.

In 2007, Chinese Ambassador to the US Yang Jiechi invited Stephenson to Washington to witness the contract signing with the US College Board for creation of a high school Advanced Placement (AP) college course in Chinese language and culture.

His eldest son Dan Stephenson, 37, an economics graduate of the University of Utah who studied and worked in China for nine years, now leads Zi Chinese Dual Language Immersion Foundation, a non-profit organization. He aims to introduce statewide implementation of this highest quality DLI program in the world to other states in the US through the foundation. His second son Andrew helps Dan at the foundation to engage other US state legislators to implement the program.

The foundation was initiated in April when 75 Chinese business leaders visited the US, a delegation organized by Shanghai Jiao Tong University's Overseas Education College and Howard Stephenson was invited to speak to them at a Philadelphia meeting.

"Many of the Chinese business leaders were moved to tears when they saw a video I brought, showing young Utah children speaking fluent Mandarin", Stephenson said. "When I told them 13,000 Utah children are learning Chinese language in Utah, Lin Zhong, chairman of CIFI Group, stood up and gave an emotional testimonial and pledged to donate $200,000 to fund the foundation so that Utah's success can be copied to other states. Other business leaders also stood and pledged to support the effort."

In partnership with Shanghai Jiao Tong University and several Chinese business leaders, the foundation will be holding a kickoff event and fundraiser in August in Shanghai.

More than 30 other states have reviewed the Utah program and multiple programs are springing up around the nation based on the Utah model. The Utah program's design and curriculum materials are used in states like Arizona, Idaho, Montana and Wyoming in the Rocky Mountains, to South Carolina and Georgia in the South, as well as in a major initiative in Delaware and soon in Rhode Island.

"American children know what they are entitled to learning today; they know they are like royalty when they are given the amazing opportunities to be bilingual. And I believe over the next couple of decades, we will recognize that mono-lingualism is the illiteracy of the 21st century, and if the US is going to focus on any language to be bilingual, it should be Mandarin Chinese. All we need to do is to tell other states' legislators that it doesn't have to cost a lot of money to implement the program, and it's not complicated to do it," said Stephenson.

A Mormon who has been taught to love all Gods' children, and all human beings are born equal, Stephenson said his life's philosophy is to extend that love to mankind in every way he can.

"What I believe is very similar to our founding fathers, that all men are created equal, and I want to do what I can to build love and relationships through communications," he said. "Today it's vitally important that our country has the best relationship in every way with China, economically, educationally, and culturally. The only thing that will separate us is ignorance, the more we can overcome that ignorance through communication, the more we can create peace."

Aiming to replicate what he did in Utah, which has 1 percent of the US population, Stephenson said the effort he is making will eventually change the scope of the US education.

"We have 13,000 students speaking Mandarin in Utah and when the current DLI elementary students graduate high school we will have more than 30,000. Imagine when we have 3 million (students) speaking Mandarin across the country, copying Utah's DLI program success. It would connect the people of China and US in many ways culturally and economically, most of all, prepare our children for a future global economy."

GM banks on Transformers for growth

Savior or showman, saint or sinner?

Over 1,200 Chinese safe in Baghdad