Electric carmaker Tesla has opened a flagship online store on Alibaba's e-commerce platform Tmall and announced it will start taking orders for its Model S there on Nov 11, adding an extra spark to the "11.11" shopping festival, China's largest 24-hour online shopping promo.

It is the first time that Tesla's cars will be sold anywhere other than through their own website and stores in China.

Consumers who have a Yu'ebao account can put down the $8,200 deposit for a Model S on the website and later arrange to pick up their new cars in one of five cities - Beijing, Shanghai, Hangzhou, Chengdu and Shenzhen, according to Tesla's Tmall page.

As a bonus, buyers who pre-order on Nov 11 will get a household charging device installed free of charge. Up until now, Tesla Model S-P 85 has been the most popular model added to favorite shopping lists by about 80 customers on Tmall. 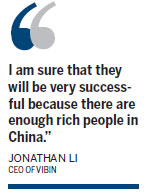 Tesla's cooperation with Alibaba dates back to April, when US customers were able to put down deposits on Tesla's official website through Alipay, a third-party payment service provider.

Tesla founder Elon Musk acknowledged China as "an extremely important market" during his tour there in April.

Tesla planned to make a major investment in China by building more service centers and charging infrastructure throughout the country. They also announced that they expect to do local production of cars in China in the future, Musk told Chinese media during his trip.

"I am sure that they will be very successful because there are enough rich people in China," Jonathan Li, CEO of Vibin, told China Daily. "Perhaps the car will be viewed as a new 'toy' for these people, the same way it was with early adopters in the US."

It could be established as a perfect O2O (offline to online) business model, he said.

Li thinks this is an opportunity for Tesla to build its public image in China, if Tesla can provide a great customer experience for these online pre-order customers, as they did in the US.

"Early on in the US, Tesla had the chance to bring people who pre-purchased their cars to the factory and organized special parties that targeted those customers," he said.

The key for Tesla to gain success is the right combination of online and offline services, which will give customers a fuller experience, said Wang Xiao, CEO of Innospring, a Silicon Valley-based technology incubator.

According to Wang, selling cars on Tmall is a smart trial by Tesla, provided they can convert visits into sales.

The Tmall website can be a great platform for Tesla to brand itself in China, build customer relationships and get feedback from Chinese customers, Wang said.

Experts like Wang still question whether Tesla can adapt their online direct selling techniques to the needs of Chinese consumers who are used to enjoying great personal-touch experiences at car dealers, especially those buying high-end cars.

It will take Tesla several years of continuous exploration to investigate the market and Chinese customers' purchasing habits and preferences for them to occupy a significant market share in the future, said Wang.

Report: Mobile advertising on a roll