Tencent looks to up app game on US campus

WeChat, the Chinese mobile application, is making a push on college campuses as it aims to catch WhatsApp in the US market.

WeChat had 468 million monthly active users during the second quarter of 2014, slightly less than Silicon Valley-founded WhatsApp, which has more than 500 million.

Chinese students often introduce WeChat to their classmates, friends and professors at US universities, especially in California, the state with the largest Chinese-American population.

Tencent does its part to market the app, too. One Tencent promotion saw 80 pizzas, 1,000 branded sunglasses and 200 t-shirts given out at the University of California at Los Angeles.

Jessica Tong, a Chinese international student at the University of California, Irvine, introduced WeChat to her American classmates.

"We discussed our group project on WeChat every week," she said.

Stanley Kwong, professor of marketing and business administration at the University of San Francisco, said it was a smart move for Tencent to make a push on campus.

A survey of more than 2,000 consumers found that 51 percent of young US buyers said they would purchase Chinese products. Kwong said it is eaiser to attract American users under age 25, rather than older generations who associate "Made in China" with cheap, low-quality products, Kwong said. 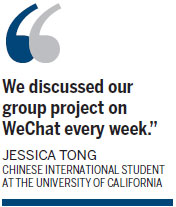 Understanding local cultures is important for Chinese companies to brand themselves and expand their markets globally, said Kwong, who believes the English name - WeChat - is a clever strategy in a bid to go global.

WeChat has primarily been used in the US by those who have connections with the Chinese community. Those looking to find friends on WeChat can be deterred because a lot of the public content is in Chinese, said Jonathan Li, CEO of Vibin, a music and picture-sharing site.

Also, many American users will not move to WeChat because their friends already are on WhatsApp.

Kwong said what would be a test for Tencent is if WeChat proved popular in states other than California, which is often used as a test market for Asian companies because of its large Asian-American population.

Kwong suggested that Tencent test the popularity of WeChat at universities in the Midwest.

Tencent-HBO deal can feed big appetite for content in China

Tencent looks to up app game on US campus