Seize the day for life-changing move

By Sophie He in Hong Kong(HK Edition)

Luen Thai holds nearly 50 percent of the joint venture on the Chinese mainland, under a country-specific stake-sharing setup.

"Right now we have maybe 1,600 stores on the Chinese mainland, and we expect our stores to grow at a rate of 20 percent a year," said Tan, adding that sales of Skechers China are growing at a double-digit pace. 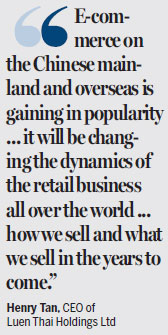 Currently most of the firm's Skechers stores on the Chinese mainland are in first- and second-tier cities, but Tan said he intends to bring the products to third- and fourth-tier cities as well.

E-commerce is also an important part of Luen Thai's growth, and Tan believes this business still has a lot of potential. "E-commerce on the Chinese mainland and overseas is gaining in popularity. I think that it will be changing the dynamics of the retail business all over the world, it will be affecting manufacturing: How we sell and what we sell in the years to come."

Tan said retail business on the Chinese mainland is growing very well. Although the Chinese economy has slowed down, it is still growing, and the middle class is expanding, which is the market segment that the company mainly targets.

Tan believes that the nation is entering into a new economy with all the changes in the Internet, and so he challenges his executives to analyze how the group's business has been positively or negatively impacted by the new economy and e-commerce.

"E-commerce is changing everybody's life, and it is creating transparency over information. If you are able to come up with good ideas, I think it will create a lot of space for young people to think outside of the box and maybe start a business on their own."

"This is what I believe. In your life, there are a lot of opportunities in front of you, whether you are able to seize the opportunity when it passes by you is very important, and it will change your life if you can capture one or of two these opportunities."