3 dead, over 180 injured in US marathon bombings 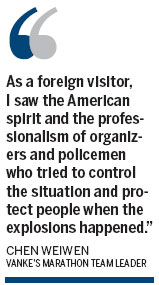 All 15 runners on the China Vanke team, including the chairman for the largest residential real estate developer in China, were unharmed after two explosions at the finish line of the Boston Marathon on Monday afternoon.

"I wasn't aware of what happened when the first explosion happened, and realized it was a planned incident after the second one took off," said Wang Shi, the China Vanke chairman who ran with his company's team in the marathon.

The 117-year-old event is the world's most prestigious and oldest annual marathon. The blast happened at around 2:50pm and killed three people and injured more than 140 people. No arrests have been made hours after the explosions.

Wang, who was in a VIP section across the street at the time of the explosions, described the scene after the explosion as "calm and in good order" when policemen directed people off the premises.

"Most people were very calm and everything was in good order," said Wang, who added that it was not as scary as it appeared on TV.

Vanke sent 15 people to compete in this year's marathon. Among the 15 runners - including one woman - seven made it across the finish line.

Wei Zhigang, 42, was the first runner from the team past the finish line - about 10 meters from the first explosion. After a brief break from his hotel near Boylston Street, he said he was blocked from returning to the marathon area.

"I was shocked and of course worried about my teammates - most of them were still in the race," Wei said.

Wei's colleague, 31-year-old Zhu Wenming, ran through the finish line at a time of four hours and 5 minutes. Within two minutes after crossing the finish, he heard the first explosion.

"I heard the explosion and saw the smoke near the finish line and shortly - within seconds - another one took off in about 100 yards' distance," Zhu said. "A woman near me immediately keeled down and started crying. It was a bit chaotic."

Chen Weiwen, the Vanke's marathon team leader, said he admired the composure at the marathon after the explosions.

"As a foreign visitor, I saw the American spirit and the professionalism of organizers and policemen who tried to control the situation and protect people when the explosions happened," Chen said.

Jin Feibao, a 49-year-old Vanke runner, said he heard about the explosions about a kilometer before the finish line. He and his follow runners were asked to stop and stay on the side.

"Although I couldn't finish the marathon, I learned a real life experience from this event," Jin said. "You can tell how powerful this nation is and how strong the people are. Nearby residents gave us help - food, water and clothes - as we were wearing very little during the race. They helped in every way they could. I was very moved."

Jin said he does regret not being able to finish the race.

"But I will come back and run for the Chicago one," he said.

Wang - who began studying at Harvard in 2011 - said the terrible event will not defeat Boston and the American people.

"It was very disturbing to plan such a thing during a sports event," Wang said. "But I was very moved to see how people helped one another in the chaos. No matter who is behind this, Boston and the American people won't be defeated by the evil. We will continue to support the Boston Marathon, definitely."