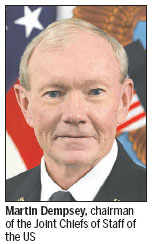 A top US military officer kicked off his visit to East Asia on Sunday amid a series of visits to China and the Asia-Pacific region by top US officials, aiming to promote understanding between Beijing and Washington and exchange views on regional affairs.

Following US Secretary of State John Kerry, Chairman of the Joint Chiefs of Staff General Martin Dempsey arrived in China on Sunday, after his trip to the Republic of Korea, while Deputy Secretary of State William Burns will also travel to Beijing later this week.

On the timing of Dempsey's visit, George Koo, an international business consultant and board member of New America Media, said bilateral relations is the highest priority for the Obama administration and military ties are also important.

Joseph Bosco, a national security consultant, who retired in 2010 from the office of the secretary of defense, said there are many areas in which the countries can and should cooperate such as proliferation, disaster relief, piracy, terrorism, pandemic diseases, and cyber espionage.

"The key message on military-military relations is that there is no inevitability regarding conflict between the US and China in the Asia-Pacific region-as long as China's intentions are truly peaceful and it abides by the international rules that have maintained peace between the major countries there for the past 60 years," he said.

In his five-day visit to China, Dempsey will hold talks with Fang Fenghui, Chief of General Staff of the Chinese People's Liberation Army, and other high-ranking military and political leaders and visit military sites.

As a representative of the military, Dempsey will help promote China-US military ties, which have improved in the last year, although strategic tensions still exist, said Shi Yinhong, an international affairs professor at Renmin University of China.

Meanwhile, US Deputy Secretary Burns will leave for a nearly weeklong visit to Asia on Tuesday, including a stop in China on Wednesday and Thursday to "meet with senior Chinese officials to discuss bilateral, regional and global issues of mutual concern".

The frequent China visits by US officials show that Washington hopes to build connections with Chinese officials from all areas and at different levels, as China's new leadership took charge in March and US President Barack Obama has also begun his second term, said

Fan Jishe, a US studies expert at the Chinese Academy of Social Sciences.

"Rethinking the future of China-US relations should be the main task for Obama's foreign policy and security teams," Fan said.

"Although the two countries still have differences in many issues, they already have the foundation to build new relationship and to stabilize this strategic relationship, as they depend more on each other politically and economically."

Zhang Yunbi in Beijing contributed to this story.