By Xinhua in the United Nations (China Daily USA)

A Chinese envoy forcefully refuted accusations made by Vietnam and the Philippines against China over the South China Sea situation, holding the two countries responsible for any disputes.

Wang said that on May 2, a Chinese company's HYSY 981 drilling rig started its drilling operation inside the contiguous zone of China's Xisha Islands for oil and gas exploration. Vietnam sent a large number of vessels, including armed ones, to the site, illegally and forcefully disrupting the Chinese operation for over 1,400 times so far.

"What Vietnam did seriously infringed upon China's sovereignty, sovereign rights and jurisdiction, grossly violated relevant international laws, including the UNCLOS, undermined the freedom and safety of navigation in the related waters, and damaged regional peace and stability," said Wang, who also heads the Chinese delegation to the meeting.

In mid-May, with the connivance of the Vietnamese government, thousands of Vietnamese outlaws committed sabotage against foreign companies, including Chinese ones, in Vietnam, brutally killing four Chinese nationals, injuring over 300 others and causing heavy property losses, Wang added.

"Till now, Vietnam still has not responded to our legitimate demand," he noted.

The envoy pointed out that lies can never eclipse truth, nor can publicity stunts provide a legal cloak for illegal actions.

"What Vietnam needs to do now is to respect China's sovereignty, sovereign rights and jurisdiction, immediately stop all forms of disruptions of the Chinese operation and withdraw all vessels and personnel from the site, so as to ease the tension and restore tranquility on the sea as early as possible," Wang said.

He reiterated that Xisha Islands are an inherent part of China's territory, and are under effective jurisdiction of the Chinese government.

"There's no dispute about them," he said, pointing to the fact that all the successive Vietnamese governments prior to 1974 had formally acknowledged Xisha islands as part of China's territory since ancient times.

"Now the Vietnamese government is going back on its word and making territorial claims over China's Xisha Islands," Wang said, noting that Vietnam is reneging on its own promises, saying one thing today and denying it tomorrow. 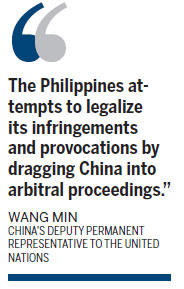 "Our ancestors told us, trustworthiness is of paramount importance in state-to-state relations," he quoted.

With regard to all the false accusations made by the Philippines against China, Wang pointed out the root cause of the disputes between China and the Philippines in the South China Sea is the Philippines' illegal occupation of some islands and reefs belonging to China's Nansha islands.

"The Philippines attempts to legalize its infringements and provocations by dragging China into arbitral proceedings," he said. "The Philippines is also trying to win international sympathy and support through deception. This is what the problem is in essence."

The ambassador noted that pursuant to the provisions of UNCLOS, the Chinese government made a declaration in 2006, excluding disputes over maritime delimitation and territorial sovereignty from compulsory dispute settlement procedures.

"As a sovereign state and a state party to UNCLOS, China has the right under international law to do this. China does not accept the arbitration initiated by the Philippines," Wang said, stressing that China's position based on the provisions of the international law will not change.

"China appreciates the efforts made by the majority of ASEAN countries to preserve regional peace and stability," he said. "We will continue working with ASEAN countries to strictly act on the DOC (the Declaration on the Conduct of Parties in the South China Sea), promote practical cooperation, enhance mutual trust and jointly uphold peace and stability in the South China Sea."