China and Brazil are marking the 40th anniversary of establishing diplomatic relations, and the extensive cooperation between the two countries is expected to deepen with this week's visit by Chinese President Xi Jinping, reports ZHANG FAN from Rio de Janeiro.

Bilateral relations between China and Brazil have entered a new stage, and experts expect the already extensive cooperation between the two countries to deepen and broaden as Chinese President Xi Jinping makes a state visit to Brazil this week.

On Thursday, Xi will make his first state visit to Brazil since he assumed the office last year. The visit to China's largest trade partner in Latin America is at the invitation of Brazilian President Dilma Rousseff.

"It will further strengthen the bilateral relationship between the two emerging countries, which are also the two largest countries in the developing world," Severino Cabral, president of the Brazilian Institute of China Studies and Asia-Pacific, said in an interview with China Daily.

"China and Brazil are strategic partners in events like the BRICS Summit and the meeting with the leaders of Latin America and the Caribbean," said Cabral. "Such relations are of decisive importance for the future of multipolar world order."

This year is the 40th anniversary of Brazil and China establishing diplomatic relations. During that time, cooperation between the two countries has led to increased bilateral trade and foreign direct investment by China and joint efforts in various fields, from agriculture to technological development. 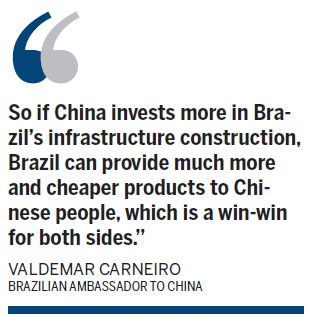 Governments of the two countries have maintained frequent communications, especially after 1985 when Jose Sarney became president and chose China as a key in Brazil's expansion of diplomatic relations.

Xi visited Brazil in 2009 as vice-president of China and praised the importance of developing China-Brazil relations, saying that further cooperation between the two countries is of "global and strategic influence".

The two countries launched the China-Brazil High-level Coordination and Cooperation Committee in 2004 after then Brazilian president Luiz Incio Lula da Silva's visit to China and the visit to Brazil that year by China's president Hu Jintao. The committee, which first met in 2006, consists of 11 subcommittees on areas ranging from economic cooperation to scientific and technological development.

In 2013, Chinese Vice-Premier Wang Yang and Brazilian Vice-President Michel Miguel Elias Temer Lulia co-chaired the third meeting of the committee in Guangzhou, China, and signed a series of cooperation agreements in fields including aerospace and agriculture.

"The two countries have achieved major progress in various aspects through fruitful cooperation in recent years," said Temer during the meeting.

"Brazil expects to strengthen such cooperation with China and learn from China's experience in infrastructure construction, which will further advance the bilateral relations between the two countries."

China and Brazil also launched the first China-Brazil comprehensive strategic dialogue at the foreign minister level in 2014 in Brasilia, the capital city of Brazil. "The cooperation between China and Brazil can strengthen the South-South cooperation and advance the liberalization of modern international relations, making the world more balanced and peaceful," said Chinese Foreign Minister Wang Yi in April.

The two countries also signed a series of joint action plans to guide the cooperation. The plan signed in 2010 during Hu's visit defined goals and direction for bilateral cooperation for five years.

"This plan pointed out the priority areas and key projects in expanding cooperation between the two countries and increased the exchanges between the two peoples significantly," said Cabral from the Brazilian Institute of China Studies and Asia-Pacific.

China and Brazil maintain close cooperation at international organization such as the United Nations and the World Trade Organization (WTO). The Brazilian government supports China's stands on issues involving Taiwan and the Tibet autonomous region and issued a communique in 2007 reaffirming its support of the One-China Policy and opposition to Taiwan's referendum on UN membership.

Trade between China and Brazil increased sharply to more than $90 billion in 2013 from only $17.4 million in 1974. China surpassed the United States as Brazil's largest trade partner in 2009 and Brazil became China's ninth-largest import market.

China's investment in Brazil also increased to more than $15 billion in 2012 from $200 million in 2009. Chinese companies have entered various markets in Brazil, ranging from automotive, agriculture and energy, to electronics and machinery equipment.

Data from the China and Brazil Business Council show that Chinese investment in Brazil is mainly in nine fields, with automotive, electricity and machinery jointly responsible for almost 70 percent of total investment.

HSBC's latest survey shows that Brazil ranks as the third-biggest non-Asian destination for Chinese investment after the US and Australia, with 9 percent. By the end of 2012, China had launched 60 projects in Brazil with a total investment of $68.5 billion.

One of the largest projects is the Belo Monte dam. China's State Grid Brazil Holding SA together with Brazil's state-controlled Eletrobras won the bidding for building a 2,092-kilometer transmission line and converter stations for the dam in early February, with total investment of around $1.8 billion.

Electricity produced by the dam is expected to be at a capacity of 11,233 megawatts to meet the huge demand for electricity by cities in the southeast region.

Another large project is the deep-water Libra oil field off the Rio de Janeiro coast that holds up to 12 billion barrels of oil. China National Offshore Oil Corp and China National Petroleum Corp are part of a consortium - including Royal Dutch Shell, France's Total SA and Brazil's state oil company Petrobras - that was awarded a 35-year production-sharing contract to develop Libra in 2013.

This is the first time that a Chinese company will be involved in oil exploration in Brazil; previous cooperation with China mainly involved oil production.

The two countries also have developed close cooperation in aerospace technology with satellite launching seen as a promising field.

In 1988, China and Brazil agreed to develop the CBERS Earth-observation satellite and launched the first in a series of satellites in October 1999. The satellites collect images of Amazon, the world's largest tropical forest, so the Brazilian government can better monitor the deforestation of this area. Three CBERS satellites have been sent into space, all by Long March 4B rockets.

"Both Brazil and China are of advanced aerospace technologies, this is the fundamental element of the two countries' space cooperation," said Chen Yuanting, a Latin American expert at the Chinese Academy of Social Sciences.

Chen said the two countries also want to highlight space cooperation as a part of South-South cooperation, aiming to gain a position in the international high-tech industry dominated by developed countries. "I am having a very optimistic observation of the further development of China-Brazil space cooperation because there is solid foundation for it," she said.

With the Chinese government encouraging more of its automotive manufacturers going global, Chery Automobile and JAC Motors also entered the Brazilian market. Chery launched its first off-tool sample car manufactured by its local factory near Sao Paulo, and earlier this year JAC announced that its factory in Brazil will begin to operate in 2015.

Meanwhile, BYD Auto will also provide electric buses to Brazil this June for public transportation and the company will invest $100 million to build a factory in Sao Paulo.

Industry statistics show that among the 51 automotive brands in Brazil, 12 are from China, making it the largest exporter of brands in the country.

Though economic cooperation between China and Brazil have experienced rapid development, more than 10 kinds of products from China were affected by Brazil's anti-dumping investigations last year. A WTO report released in February said Brazil was the world's most protectionist country last year, with 39 new anti-dumping cases.

"Trade friction and disputes are inevitable during the international trade development," said Chinese Ambassador to Brazil Li Jinzhang recently, "we should notice that even under such condition, the bilateral trade between China and Brazil still surpassed $90 billion." "Competition will bring about technology, experience and create more job opportunities, so it does more good than harm," he said.

The expenditure will improve the country's transportation system and enable its agricultural products and raw materials to reach international airports much faster and easier.

"So if China invests more in Brazil's infrastructure construction, Brazil can provide much more and cheaper products to Chinese people, which is a win-win for both sides," said Brazilian Ambassador Valdemar Carneiro Leao this month.

China gains WTO support in its challenge to US tariffs