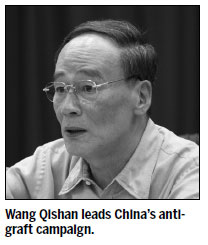 What China will be like depends on reform and how far that reform can go will, to some extent, be decided by how long and how well President Xi Jinping's fight with corruption goes. The graft officials represent the backbone of the vested interests resisting reforms.

Xi's fight with prevalent corruption has demonstrated multiple characteristics and consequences that hint at the possible depth and duration of the formidable self-revolution of China's state system, as Xi depicted it.

Xi called for government to change its working style, improve efficiency and save money at first. Few expected such a rectification movement, a periodic conventional practice in the Party's history, could have evolved into a sweeping anti-corruption fight with almost all forms of malpractices from the power elites in all spectrums of the state apparatus, including the Communist Party of China (CPC), the government, the People's Congress, the Chinese People's Political Consultative Conference, and the People's Liberation Army.

The anti-graft campaign has been going on for one year. Hundreds of officials from village heads to the former standing committee of the politburo were sacked and placed on trail. Some senior posts in the central authority, which were thought safe and immune to any anti-graft campaign before, are not safe anymore.

No former leaders after Chairman Mao have taken the fight against corruption so seriously.

That the momentum will continue for an unfixed period of time wins back the Party trust of more people which were lost as graft worsens from sporadic cases in Mao's era to a rampant symptom infecting whole state organs when Xi took his post two years ago.

The investigation of former Ministry of Railway head Liu Zhijun, former Chongqing Party chief Bo Xilai, former Central Military Commission vice-chairman Xu Caihou and former police chief Zhou Yongkang has raised the people's curiosity about whether officials superior to Zhou will become new targets. There is also concern that Xi's dealing with corruption may come to an end because the deeper the fight goes, the harder it is.

In response, Xi and the Party's discipline chief Wang Qishan, a resolute figure in Xi's cabinet, signal in various means that there is no end to the campaign until an institutional mechanism is in place to "cage the power", and make the power holders "dare not, cannot and will not" seek illegal profit from power.

Always being ready to respond to the public's doubt on the anti-graft campaign is a noteworthy characteristic of Xi's style, making the fight against corruption a public event rather than only an official action as before. The people feel that their opinions are heeded and their interests are relevant to Xi's dealing with power abuse.

Xi reforms the complaint system for the Party and the government to better hear people's views. Clues and reports related to graft exposed on social media are well processed. And disciplinary inspection teams are sent to different places and departments to collect clues.

This is a big progress because it wakens a consciousness of citizenship. In history, the Chinese people always felt the central authority's cleanup of corrupt officials had no business or connection with their life.

The money embezzled by the officials belongs to the emperor, the government or the state, but not to each of the nationals. And the sacking of graft officials has not translated into benefits for the people.

In Xi's era the removal of corrupt officials in key fields such as the railway and oil, or big State-owned enterprises, have brought overdue breakthroughs which generate more opportunities for private investors and more vitality to the industries.

Xi pays special attention to eradicate officials' gray income or illegal profit from their power and the malpractices of officials' family members.

And the naked officials whose families earn permanent residence or foreign nationalities abroad must quit their civil-servant jobs, or let their family members give up the overseas residential rights.

More than 20 years after the 1980s when many officials quit their jobs to go into business, comes a new wave of going to the sea which means bidding farewell to reliable jobs in the government to run one's own businesses, in China, especially among town and county-level civil servants.

Innovation, adventurous spirits, entrepreneurship and respect for knowledge and technology are coming back gradually. These are all necessary for China's restructuring reform. In this sense, China Dream, a term Xi proposed to inspire and unite the nation, is not empty talk, but a tangible thing concerning each national.

There are also challenges in Xi's fight with graft.

He urgently needs to fill the vacuum left by corrupt officials with the rule of law so the ant-graft institutional mechanism can serve as ballast for the transformation of China's governance system. Or it is impossible to solve the corruption issue only through his efforts in his tenure.

The forthcoming Fourth Plenum of the 18th Central Committee of CPC later this year will provide a good opportunity to make breakthroughs in the anti-graft institution construction.

The reform of the judicial system and legislature, which emphasizes independence, points to the right direction of the anti-graft institution construction. China cannot always rely on the higher authorities to supervise the lower ones.