China should end its family planning policy as soon as possible to curb the fast aging of the society, said experts attending a population policy studies forum at Fudan University in Shanghai.

The average fertility rate in the United States is about 2.1, which is the basic replacement fertility rate ensuring the population remains unchanged, according to Xi Fuxian, a professor of population studies at the University of Wisconsin.

"The real fertility rate in China could be much lower than the official announcement of 1.8, and the gender ratio, which means the number of male to per 100 females, is about 121, far above the 105 ceiling safety line," Yi said.

In China's most developed city Shanghai, most of the childbearing couples are single children of their respective families; the fertility rate is only 0.7 percent, the lowest in major cities in the world.

"Population policy is not a spring, because when the policy is relaxed, the fertility rate will not necessarily rebound," said Guo Zhigang, professor of sociology at Peking University. "But the low fertility is a result of the strict family planning policy."

The census in 1964 showed that the young people under 15 years old accounted for more than 40 percent of China's population.

The proportion fell to 16.6 percent in 2010. The United Nations predicts that proportion of young people in China will fall even lower than Russia's, and only higher than the seriously aging Japan by 2030.

Population changes will affect the nation's economy. The US economy will benefit from the healthy population structure in the long run. By 2040, the median age of the US population will be about 40 years old, but China's will be about 50. Even if China is the world's largest economy by then, its per capita GDP will be much lower than the US'.

India will overtake China in population by 2040, when it will have 1.6 billion people, 850 million of whom will be working-age population, compared with China's 690 million. The gap mainly is in 20-to-40 age group.

"China will almost certainly fall into a low birth rate in 20 years, even if the government abolishes all controls on childbirth," said Cai Yong, sociologist at the University of North Carolina, on the forum. "The culture is pro late childbirth and there is no restriction against artificial abortion. Chinese people are increasingly sensitive to their conditions of education, economy and life."

The uneven distribution of public resources across China has a direct influence on the population's quality.

Generally speaking, it is difficult for these children to get a good education and training. China's investment in education just reached 4 percent of GDP, an international benchmark. The excessive concentration of good-quality education resources in several big cities means only a small proportion of urban children are the main beneficiaries of the limited input in improving the lot of the people. 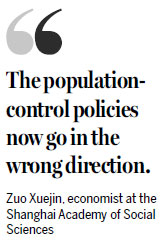 Reproduction should be guaranteed by a social system. But China's current social system is not supportive of reproduction. The government needs to construct an effective supportive social system to stimulate people's fertility desires, rather than only granting them the overdue childbirth freedom, Cai noted.

The National Bureau of Statistics shows that the working-age population from 15 to 59 was 937.27 million in 2012, 3.45 million lower than the previous year. It is the first time China saw the decline of the absolute number in its working-age population since the early 1960s, when a great famine swept the country.

"The population-control policies now go in the wrong direction," said Zuo Xuejin, an economist at the Shanghai Academy of Social Sciences. "The authority must adjust its childbearing policies and completely abolish the family planning policy as soon as possible." Zuo said that increasing the input in medical care, social welfare and education can not only improve the quality of human capital, but also increase the willingness of people to reproduce.