Minorities outnumber whites in US schools

Minority students in the US public school system will outnumber white students for the first time ever this fall, due to growing populations of Asian and Hispanic students.

The Department of Education shows in its projections of education demographic trends that in 2014, students of color will make up 50.3 percent of public school enrollment, compared to 49.7 percent of white students, which has dropped from 63.4 percent in 1997.

Though white students will still make up more than any single racial or ethnic group, compared to students of all minority groups, they will no longer make up the majority, the National Center for Education Statistics (NCES) said in a report.

"We have projections showing most students going up, compared to what's happening with white students," William Hussar, author on the predictions report, told China Daily.

"For students aged five through 13, we see the number of white students tending to go down, pretty much every year since around 2003," Hussar said. "That would contrast with some of the minorities: the number of Black students was going down, and then the Census predicts the number eventually going up again. Hispanic students are just going up, and the same with Asians."

The NCES makes its projections based on a combination of data provided by the Census Bureau as well as data the center collects, Hussar said. It asks for information on ethnicity on surveys given to students, and since it began making ethnicity-related projections in 2010, it has predicted that the share of Asian students will continue growing year after year, Hussar said.

Washington-based Pew Research Center said that the Department of Education's projections reflect the shifting demographics of the US. 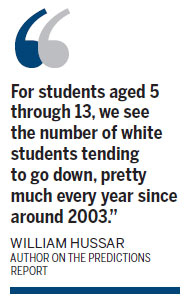 "A steady demographic change over the years has resulted in a decline in the number of whites in classrooms even as the total number of public school students has increased," Pew said on its website on Aug 18 in response to the NCES report.

"While the number of white students has declined, there have been large enrollment increases of Hispanics and Asians, two groups that have seen overall population growth," it said.

Pew attributed the growth in ethnic student enrollment to increasing populations of US-born Hispanic and Asian children, rather than immigrant children, based on Census data. According to Pew, the number of US-born Asian children aged five to 17 increased 50 percent between 1997 and 2013, while the immigrant population "increased a more modest 9 percent". During the same time period, the number of Hispanic children jumped 98 percent, contrasted to the immigrant population, which declined by 26 percent.

"I think that it's not unexpected that the shift we're seeing reflects changes in the US-born student population and not just changes that are a function of immigration policy," said Brenda Shum, director of the Educational Opportunities Project at the Lawyers' Committee for Civil Rights Under Law.

Shum said that this year's kindergarten class is predicted to be the first to have predominantly minority students, based on projections made from the latest set of Census data.