China is poised to overtake the United States and become the world's largest economy in 2024, due mainly to growth in China's consumer spending, according to a new report from global industrial data and analysis firm IHS Inc.

Over the next decade, consumer spending in China is expected to grow at an annual rate of 7.7 percent and will climb from $3 trillion to nearly $11 trillion by 2024. By then, IHS also predicts that China's nominal gross domestic product (GDP) will overtake the US total - $28.25 billion and $27.31 trillion, respectively. 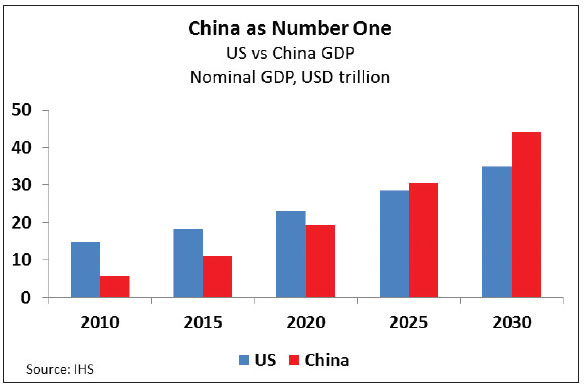 "Over the next 10 years, China's economy is expected to rebalance towards more rapid growth in consumption, which will help the structure of the domestic economy as well as growth for the Asia-Pacific as a region," Rajiv Biswas, IHS's chief economist for the Asia-Pacific, said in a Sunday press release announcing the report.

Biswas said economic developments in China could have a wide-ranging effect, including benefits for a number of emerging East Asian economies.

As consumer spending rates in China continue to rise, the country's share of world GDP is expected to increase from around 12 percent in 2013 to 20 percent of the global total in 2025, according to IHS data.

Biswas said that the World Economic Forum's upcoming Annual Meeting of the New Champions, which is slated to begin Wednesday and conclude Friday in Tianjin, China, would focus on "some of the key sectors" for promoting change and progress in the world's second largest economy.

"Science, technology and innovation, these are some of the key sectors that will be crucial in helping to transform China's economy from the low-cost manufacturing, export-driven economy of the past three decades into a higher value-added economy driven by domestic consumer demand," Biswas said.

"In 2025, if we were to take a global economic snapshot, China's economy will play an even bigger role as a key driver of global trade and investment flows," he said.

Ann Lee, a US-based expert on China's economic relations, who also serves as an adjunct professor of economics and finance at New York University, said she agrees with the theory that China will become the largest economy in the next decade due to the sizable middle class the country boasts.

"This development will change the Asia-Pacific region first, and then the rest of the world," Lee wrote in a Tuesday email to China Daily. "China is more liberal-minded than the US at this moment, in terms of spreading wealth and opportunity to greater numbers of people. And thus, [China] will push economic development and innovation in places the US has failed to do."

Jay Ritter, a finance professor at the University of Florida, said China's economic growth could create "win-win opportunities" for trade between the US and China and could also "boost living standards in both countries".

"A more globalized world is good for everyone," Ritter said in a Monday interview with Fox Business News.