Xiao Lin, director of the Shanghai Development Research Center, shared the progress and future plans of the Shanghai Free Trade Zone (SFTZ) in a talk hosted by the US-China Institute of University of Southern California on Wednesday in Los Angeles. Scholars, professionals and students came to hear what he had to say.

The 11-square-mile pilot free trade zone was established by the Shanghai government in 2013. The zone is a great step forward for Shanghai to connect itself more closely with the rest of the world, in terms of economy and business. The objectives of the SFTZ are to present new areas for international trade and investment, increase the free circulation of RMB and enhance China's competitiveness.

"The purpose of establishing the SFTZ is to make this area as economically liberal as the USA, Hong Kong and Singapore," Xiao said. "Although more than 80 percent of Fortune 500 companies have set up offices in Chinese mainland and in Shanghai, there are some business activities they cannot conduct there. They need to go to places like Hong Kong. With the establishment of the SFTZ, these companies can stay in Chinese mainland, stay in Shanghai to carry out all aspects of their business." 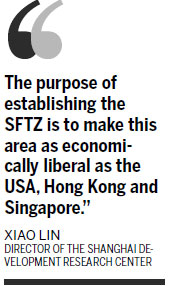 Xiao explained that the SFTZ was now executing a "negative list" for its investment management system. This is a big leap ahead from the original positive list, which is still prevalent in the rest of China.

"With the negative list, the government only regulates what companies cannot do, while the positive list requires companies to do this and do that," said Xiao, who said the number of items on SFTZ's negative list decreased from 190 to 139 from 2013 to 2014. "We are now working on the list to make it even shorter for 2015," he said.

Other institutionalized innovations include trade supervision facilitation and RMB convertibility under capital accounts.

"We have made many accomplishments so far in the SFTZ," said Xiao. "They are equally important. First, the trend of being forced to reform has been set, due to the objective of being compatible with international standards. Second, the service industry has been further opened up. Third, the institutional framework compatible with the global business world has been established. And lastly, the SFTZ has become the testing field for the rest of China."

The future of the SFTZ is very promising as the trading center of RMB.

Xiao Lin's team is headed to Washington to discuss the status quo and future of the SFTZ with the US China Business Council.

Huang Xilin in Los Angeles contributed to this story.