Shawn Chen just wanted to make a difference in Henan province. All he did was establish a major university.

Recalling his decision to start Sias International University in Henan, where the economy was comparatively slower than in the major cities of China, Chen said it was about "devoting myself to a lifelong battle. I want to make a change there."

Chen's dedication was rewarded at the US China Outstanding Contribution Award ceremony in Shanghai on Feb 8. Chen received the award for his contribution in developing Sias in Xinzheng, Henan, in central China.

"This award arrived so much earlier than I expected," Chen said. "I thought I needed 10 years at least to make Sias successful."

The award, founded in 2010 by the US China Business Association, is designed to recognize people in China and the US for their outstanding contributions in various fields.

Chen, who has a PhD, is a naturalized Chinese American who was educated in China and the United States. He has embraced education, business and entrepreneurism in both countries. Chen's business ventures range from the hospitality industry to a steel- door manufacturing business that sells its products in China and the US.

He has served as president of The Sias Group, Inc, since 1992. In 1998, with the approval of the Ministry of Education and the State Degree Office in China, Chen founded Sias International University.

Starting from a small campus in 1998 with an enrollment of fewer than 300, Sias now has 26,400 students and employs more than 1,700 full-time faculty members, including 157 full-time foreign teachers. The ratio of foreign faculty to students ranks first in China.

In the past 17 years, Chen has established partnerships with more than 52 international partner schools in 20 countries, including the US, Japan, Thailand and Indonesia. Sias was one of the first institutions approved by the Degree Committee of the State Council in China to grant both Chinese and American bachelor's degrees.

Before Sias International University was built, Chen had experience helping Chinese officials and educators visit American schools to find educational partners in the US. Chen recalled that Henan was comparatively lacking in higher-education resources. China's national college entrance examination was harder on Henan students at that time - they had to get much higher scores in the exams than those from big cities like Shanghai and Beijing, due to the Hukou, a residency restriction in China.

"Friends asked me why did you go to Henan," Chen said. "You don't even have a family member there. I told them I could not forget what I saw in Henan on my visit before I made the decision. People need more education resources there. What I am doing is not opening five-star resorts or selling luxury goods. I go where I am needed the most."

Chen described himself as more like a social worker than a businessman. His goal was to provide high-quality education and make it affordable to local families. With the largest population in China, Henan province had limited universities and colleges, especially highly ranked ones, in the 1990s.

Now, Sias' tuition is still comparatively low at 13,900 yuan per year, compared with the national average of close to 25,000 yuan, according to national statistics. "I never forget my commitment as making this school a high-quality education affordable to local community," Chen said.

"There is so much work that needs to be done," Chen said.

"However, most important of all the tasks is innovation," Chen said. "How do I make Sias innovative, and how do I lead all the students to be innovative in the future?"

Chen's answer to this question is to build a unique Sias culture, what he described as "knowledge meets practice", which he further explained as an "interactive ecosystem" of liberal arts education, cultural environment and diverse campus activities.

The curriculum at Sias is student-oriented. By using a combination of theoretical and practical teaching methods, Sias ensures that the quality of teaching is continuously improving and that the Sias employment rate for graduates remains in the top three among all Henan universities every year.

"Young students need to be inspired," Chen said. "I want to inspire every student by our cultural environment."

Such an inspiring environment is the combination of values, cognitions and other cultural elements. By providing an exquisite campus environment, cultural diffusion and living facilities, and green landscaping, Chen hopes to foster an atmosphere to improve students' critical thinking and innovation abilities.

"I want to create a sense of the ceremonial in the campus," he said. "A festival of flowers, music and sports. I want Sias students to be affected by the joy of achievement and see that their hard work and innovation are paiVd off."

Sias' homecoming parade, is a mini version of Pasadena, California's Tournament of Roses Parade. Sias students participated in the process of designing the parade and costumes. Student reports that the parade has broadened their horizons, connecting them to a larger world.

Chen makes sure that the most shy students in class participate in student debates.

"I want them to grow up with an entrepreneurial spirit and know that their future is in their own hands." he said.

Chen believes one of the most important things one can learn in college years is communication skills. "Sias students are all fluent in English," he said. "Nobody studies English for scores. They use it as a language to communicate in group study and throughout all activities."

Other campus activities include the candlelight ceremony, a welcoming event in which some 7,000 new students light candles at the same time; international cultural week, which is a week-long exhibition of different cultures around the world; Sias students clubs; and startup-business activities.

Parent representatives are invited to attend conferences and are encouraged to discuss management of the university.

"I hope the school governance is as transparent as possible to all participants, including students, parents and local communities," Chen said.

Sias has been recognized among the Top 10 Most Influential Foreign-owned Undergraduate Universities in China; The Most Competitive University on Employment in China; The Strongest Comprehensive Sino-Foreign Cooperative University; and The Most Desirable University for High School Graduates awards by Chinese media and related State institutions. 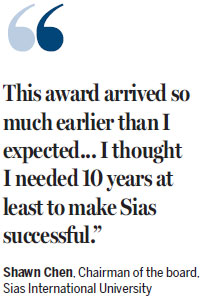 Why China's youth is getting the needle

Most Chinese forced to return home were living abroad illegally