Alibaba Group Holding Ltd's initial public offering on the New York Stock Exchange will be this year's 12th IPO from China. Alibaba's debut may be a watershed for Chinese IPOs as more possibly aim to get on US exchanges, Jack Freifelder reports from New York.

Friday's opening bell at the New York Stock Exchange may be one of the most historic days in the Big Board's 197-year history. Call it "Alibaba Day".

By the end of the day's trading, China's biggest e-commerce firm is expected to become the largest initial public offering (IPO) ever in the United States.

On Thursday, Alibaba Group Holding Ltd priced its IPO at $68 per share, according to IPO investment adviser Renaissance Capital. That could mean the company co-founded by Jack Ma may raise at least $20 billion depending on where the IPO price settles and the potential options that underwriters could exercise after the opening bell on Friday when the stock is expected to start trading under the ticker "BABA".

Opening day for trading Alibaba has been more than a year in the making and for some investors it could not come fast enough.

"The reason why it takes so long to bring an IPO is just because it takes a company a long time to get ready," Kathleen S. Smith, a principal and IPO ETF (exchange-traded fund) manager at Renaissance Capital, told China Daily in an interview. "Once a company decides that they're going to move forward with an IPO, they need to get a lot of things in order."

"Then the Securities and Exchange Commission looks over all the information, comes back to clarify questions and make sure disclosures are right, and so forth, and I'm sure for Alibaba it was particularly challenging to figure out," she said. "They probably had a couple rounds with the SEC, but you want things to be properly vetted."

While Alibaba's road to becoming an IPO has received global media exposure, what hasn't been in that spotlight is the push this year by other Chinese companies - 11 of them so far - to get listed on the exchanges.

Smith said American investors now love Chinese IPOs after having "come through a love-hate relationship" with them that dates back over the better part of the last decade.

"You go all the way back to 2010, and most of those Chinese IPOs that came out in 2007, '08, '09, and so forth, performed very badly because many of them didn't have the accounting transparency that investors here were expecting," Smith said. "There was a period of time all the way through 2010-11 where investors were very turned off. Some things got cleaned up but it took a period of time before investors got comfortable. Basically, in 2013 we started to see some improvement."

Smith said IPOs listed in Hong Kong and Shanghai have not performed as well as those listed in the US "so we've had a more receptive IPO market in general - in particular for growth companies. But when the Hong Kong market doesn't perform well, it relates to the performance and investor enthusiasm for equities in the market where [the stock] is trading."

As for those 11 Chinese companies that have listed their IPOs in the US this year, they have started to deliver stronger returns across the board. Smith said they are up nearly 40 percent from their offering price, with an average first day pop of close to 11 percent.

Some of the companies in that group are in the e-commerce sector, including online retailer, JD.com, Chinese microblogging website, Weibo Corp, online jobs site, Zhaopin Ltd and online-based leisure-travel company, Tuniu Corp.

A July report on the US IPO market from Smith's Renaissance Capital showed that the second quarter of 2014 was the most active quarter for Chinese IPOs in four years.

"Chinese companies raised $3.1 billion [through Q2 2014], the largest group of US IPOs to come out of China since the fourth quarter of 2010 (21 IPOs)," the report showed. "The comeback was driven by tech (8 of the 10), primarily Internet, with high-profile debuts from direct online retailer JD.com and Twitter analog Weibo."

Top performers from the group have included packaged tours site Tuniu and JD.com, the report said.

Tuniu, which brought its IPO to Nasdaq in May, has seen an increase of more than 100 percent in that same timeframe, with shares climbing to $18.15 a piece from $9.

And then there is JD.com, also known as Jingdong Mall. It is the biggest direct seller of online goods in China and the country's second largest e-commerce company - second only to Alibaba.

JD listed on the Nasdaq exchange in May and raised $1.78 billion in the biggest IPO in the US by a Chinese company to date. Its share price rose 55.8 percent from a pricing of $19 to $29.60 in four months.

Alibaba helps connects buyers and sellers alike through six online marketplaces. Its Taobao.com and Tmall.com are the largest and China's largest third-party platform for brands and retailers, respectively, based on data from iResearch, a leading Chinese Internet industry consultancy. The New York Times reported earlier this month that Taobao and Tmall account for nearly 80 percent of all Chinese e-commerce transactions.

About 46 percent of China's 1.3 billion population, or 620 million, use the Internet, and iResearch forecasts that group will grow to 790 million by the end of 2016. And the number of online shoppers in China reached 302 million in 2013, a group roughly equal to the entire US population, according to the China Internet Network Information Center (CNNIC).

China is on course to overtake the US as the world's biggest online retail market this year with predicted sales of nearly $180 billion, according to New York-based market research firm eMarketer.

An August 2013 report from global management consulting firm Bain & Co said: "The year 2013 will be remembered as the one in which China surpassed the US as the world's largest retail market. Digital retailing has furiously transformed shopping and purchasing habits opening up vast opportunities for retailers and brands that pay attention to the nuances of massively changing consumer behavior."

The report said that Chinese e-commerce spending "has grown more than 70 percent annually since 2009 and is expected to continue on its amazing trajectory".

To Josef Schuster, founder of Ipox Schuster LLC, a Chicago-based independent financial-services firm specializing in global IPOs, one of the selling points for Alibaba is certainly the "tremendous market share" it has amassed in China.

"By the raw numbers there's so much potential in the Chinese market, which is sold to the investor as the opportunity which Alibaba can go for," Schuster said in an interview with China Daily. "But, as we have seen with Facebook where we saw very similar pre-IPO dynamics, it may not be just a one-way street going upward after the IPO."

"It's going to be a highly volatile stock going forward, which may trade up in the short term, but obviously the proof of the pull is in the long run," he said.

Facebook Inc's $16 billion offering in 2012 is the largest IPO on Nasdaq, according to data from Renaissance Capital.

At the high end of the spectrum, Alibaba's listing would not only top Visa Inc's $19.7 billion debut on the NYSE in 2008, but could surpass the record $22.1 billion offering brought by Agricultural Bank of China Ltd in a dual IPO on the Shanghai and Hong Kong stock exchanges in 2010.

Schuster said he feels there is a bit too much optimism around the Alibaba offering because people "underestimate the risk associated with IPOs coming out of China".

"There's a little too much optimism right now given what's happening to the Chinese economy itself," he said. "I think there are clearly warning signs that there's a slowdown coming, and the slowdown should affect high-beater stocks like Alibaba no matter what. The question for a pure, hard-line investor looking at the numbers is what type of price do you want to pay, and the price here is steep by any measure."

Meanwhile, to those in the financial world dealing with other IPOs this week they have dealt with what Scott Sweet, a senior managing partner at IPO Boutique, an IPO and secondaries rating service, calls the "Alibaba effect."

"There are five biotechnology companies coming this week, and they're not even getting any eyeballs," he told China Daily in an interview. "A phase one biotech firm compared to what is widely viewed as the world's largest IPO in history is of little consequence."

As for his firm's clients, Sweet said they were told, "We feel all deals will be muted as a result of the massive interest in Alibaba". 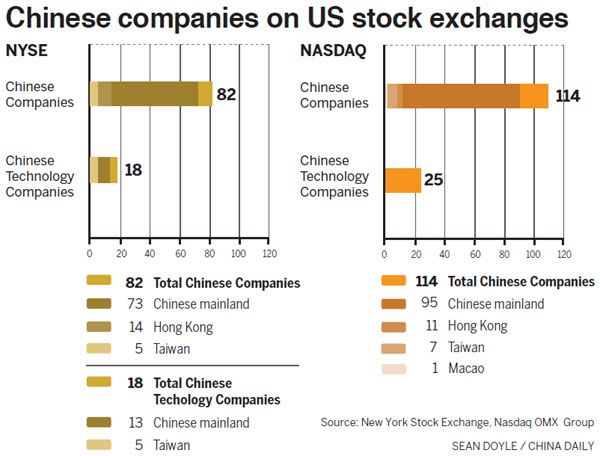