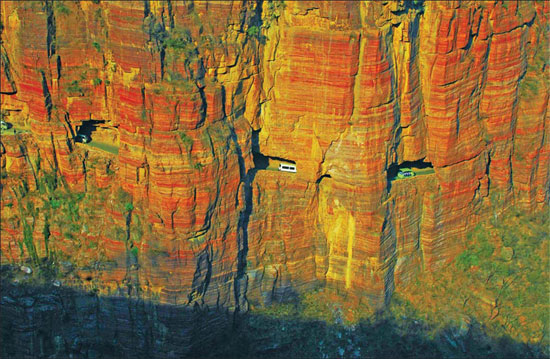 The colors of autumn are not always red and gold, but there is a spectrum of choices for the traveler with a camera. Wang Kaihao helps identify the most picturesque sites in China for the tourist who wants to take away lasting impressions.

From seas of waving red grass as far as the eye can see to mirrorlike, brilliant blue karst pools, China's vast and diverse landscape offers endless options to the photographic enthusiasts. There is no better time than now to collect an album of travel photos that will be the envy of the camera club. The skies are clear, the breezes brisk and conditions are ideal to record the country's most unbelievably beautiful natural wonders. 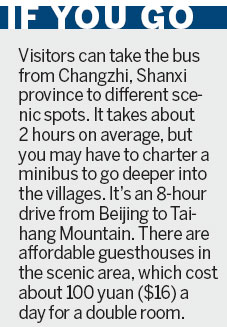 Scenic road is a long adventure with breathtaking view

'The road that hangs on the cliff" - that is how locals describe the precarious winding route up to the Taihang Mountain on the border of Shanxi and Henan province.

It is a long channel carved from the mountainside and is almost a deep tunnel-cave. When the road was being cut in the 1970s and 1980s, it was the only way in or out of the mountain and served villages which had been isolated from the outside world for many years.

The tunneled road was meant to facilitate better transport, but it is also known for its tremendous visual impact. Traveling through this gallery is an eye-opener, and creates tremendous opportunities for the shutterbugs.

You may also want to set your cameras aside for a while to listen to the old stories about the construction of this legendary road.

In the southern part of Taihang Mountain, the Loess Plateau dramatically morphs into the China Plain, and creates a significant change in landscape and scenery. The transition takes place in just a few hours as you drive through deep gullies and steep mountains which suddenly open out into a vast greenness soothed by the gentle splashing of waterfalls.

The canyon is also a treasure trove of flora and fauna which combines species from both North and South China. Visitors will have chance to get close to rare animals like monkeys and birds in the natural reserves.

Occasional temples and other historical relics are often hidden deep in the mountains and it will take the keen eye of a photographer to seek these out. History buffs may also want to take note that this area was a strategic stronghold in ancient times, and has been fought over in many battles.

Good liquor is brewed where there is good water, and China's most famous white spirit Moutai is helped by the water of the Chishui River. The name means "red water" and the river runs through the north of Guizhou province.

The particular geographical form that gives rise to the river and its name is known as the danxia landform, characterized by red riverbeds fringed by steep cliffs and formed more than 200 million years ago. It looks like stacked pancakes and evokes memories of the stark landscapes in the Star Wars series.

Red earth and green vegetable blend in harmony. Trees grow out of crevices in the rocks, and falling cataracts of water carve out gullies in the red rocky slopes. There are plenty of pretty pictures so it is little wonder that Chishui was chosen by the China Photographers Association as one of their bases in 2007.

The flora is especially noteworthy, and there are many ancient plants deep in the primeval forests. It is easy to find Asophila, a kind of fern, which has populated the region since the Jurassic age. Chishui, once an inner land lake, used to be a hub for dinosaurs. 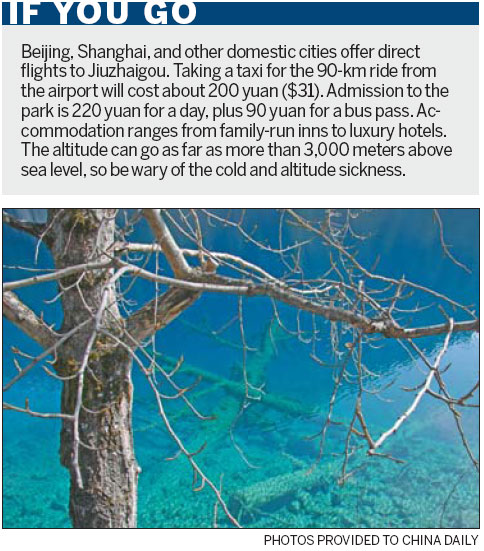 This is setting for fairytales. Jiuzhaigou in the north of Sichuan province is well known for its peaceful pools of water colored a chalky blue that reflects the hue of an azure sky. These crystal-clear lakes are indeed a gift of heaven, thanks to the karst landscape, and the high density of calcium carbonate crystals in the water.

The nature reserve and park is a paradise for photographers both professional and amateur, and nature has already prepared the setting for good pictures. Every scene is like an oil painting with blue and green pools against a backdrop of mountains with glistening snow-covered peaks.

Jiuzhaigou is listed as a world natural heritage site by UNESCO and is one of the best-preserved wetlands in the region. Animals and plants abound, thanks to an eco-system that has been kept carefully intact.

There are nine ethnic Tibetan villages in the area, hence its name, and the villagers provide both local color and a way to inner peace, if you are so inclined. There are many Tibetan Buddhist places of worship here. Just follow the prayer flags. 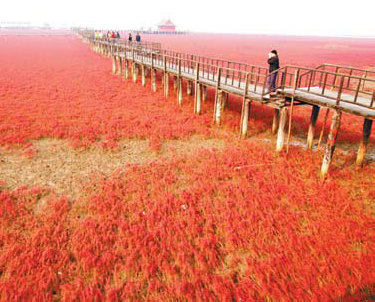 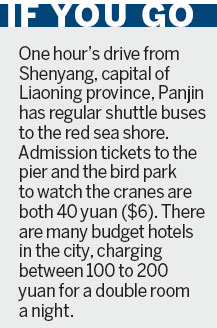 China's "red sea", by the shore of Panjin, Liaoning province, is created by Suaeda salsa, a kind of seagrass. It has spread over the seashore shoals and expanded at the rate of about 50 meters a year deeper into Bohai Sea.

It is an amazing experience walking along the 680-meter-long trestle bridge right into the center of this sea of red, especially when the tide is at ebb and flow.

The red reeds, occasionally mingled with yellow and green ones, are colorfully vibrant during this time of the year. They are not cultivated, but are encouraged to grow by the high organic content in the water.

In the harsh cold of winter, the red will fade, but the weeds will be back in April when the seas turn warmer.

These wetlands, among the country's best preserved, are also the southernmost habitat of the red-crowned cranes, as well as the refuge of more than 200 species of birds. Visitors can charter a boat and paddle out in the midst of these creatures and wait patiently for that perfect shot. 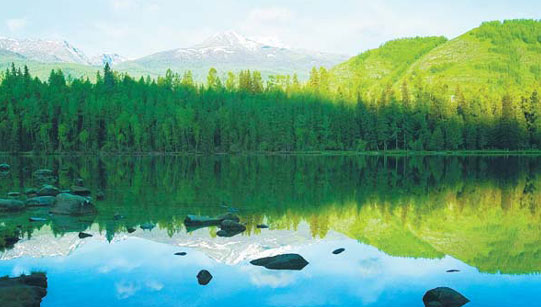 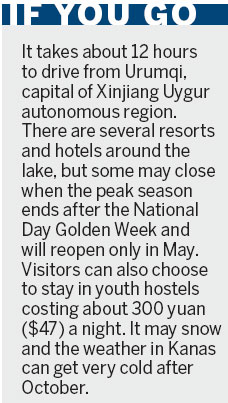 If you like horseback riding and photography, this is the place to go to. Kanas, a nature reserve and geological park, is part of the Altay Mountains in the Xinjiang Uygur autonomous region, also known as the China Alps.

This highland region boasts a diversity of plants and protected animals living in areas ranging from glaciers and snowfields to rivers and grassland. It is also dotted by pockets of civilization represented by pretty yurts or villages inhabited by various ethnic groups.

Local Kazak horses are known for their pleasant personalities and gentle dispositions. Take a ride out to Kanas Lake, more than 180 meters deep and believed to be home to a cousin of the Loch Ness monster. But if you look up, you will see more familiar creatures, such as majestic condors soaring above to the mountains that average about 1,500 meters above sea level.

Even an aimless amble through the alpine meadows full of wildflowers is to experience a freedom seldom known by city folks. When you get hungry from all that activity, there is always a mug of savory milk tea waiting, or a bubbling cauldron of mutton soup.

Autumn is one of the best times to go, while winter will sheath the land in a pristine blanket of snow.