A golden heart and future 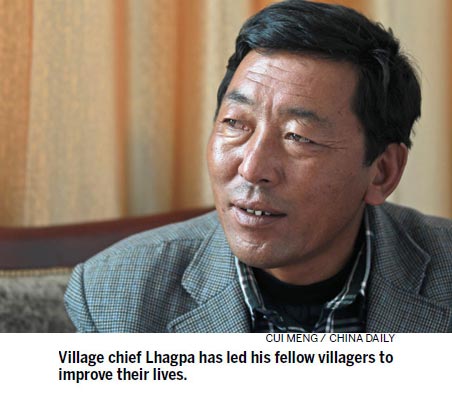 Lhagpa was the first in Lhasa's destitute Dagze county to achieve relative prosperity - the 46-year-old earns 80,000 yuan ($12,800) a year from his transportation business and owns a two-story house with modern appliances.

And the chief of Bagaxue village hopes to bring the rest of Dagze's residents up with him, he says. He has been elected as a delegate to the 18th National Congress of the Communist Party of China to open in Beijing on Nov 8.

Under his leadership, villagers' average annual per capita incomes have doubled since 2005 to 6,000 yuan.

The self-made success story comes from a poor family with a tiny plot of farmland.

His fate changed after he bought a tractor with bank loans at age 16. He made enough money with the tractor to buy a truck. And he earned enough from using the truck to buy a passenger bus.

He invested his fortune in others.

In 1995, Lhagpa bought a 7,500-yuan generator, electric wires, transmission poles and light bulbs to provide electricity to every household.

Until then, the village only had oil lamps, and residents suffered boredom after dusk.

Grateful villagers lined up to present him hada (ceremonial scarves).

He ran the generator until the government completed facilities that ensured the power supply in 2001.

Lhagpa fed the generator more than 6,000 kg of diesel. During the first few months, he'd stop work early to return home before 8 pm to run the generator. He later taught his son and neighbors how to do it.

He also bought a 21-inch color TV and a video player.

Lhagpa put many chairs in his courtyard and played two films a night for the community. It cost him 300 yuan a month to rent the movies from Lhasa.

The movie nights became increasingly popular. Up to 300 people would show up, including many from nearby villages.

There was usually a huge pile of trash for his wife, Drolma Yangtse, to clean in the mornings.

Lhagpa was honored as a National Model Worker in 2001. He joined the CPC in July 2002 and was later unanimously elected village chief.

He has contracted his transport business, so he can focus on village affairs. His company still offers free rides for sick villagers heading to the hospital, and he covers their medical fees if they're impoverished.

He taught six young men how to drive. Three of them bought their own buses to make better livings.

His newest ambition is his greatest yet. Construction has begun on a green tourism center expected to create jobs for 200 people - construction workers, maintenance people, managers and entrepreneurs.

"Every family in the village will have someone working at the center and enjoy better incomes," he says.